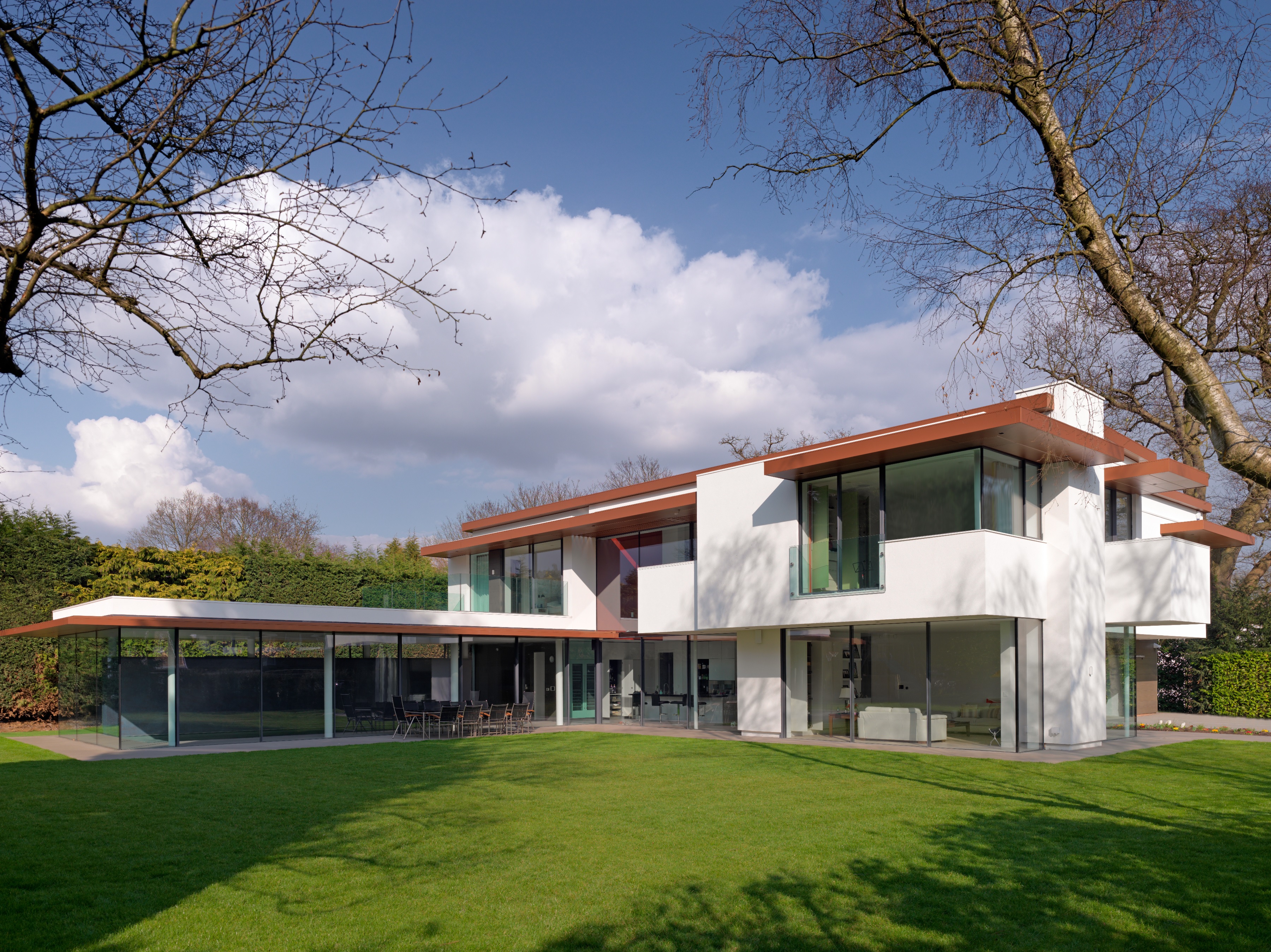 design et al are delighted to announce that 3s Architects and Designers have won the Overall Development – UK Award in The International Design and Architecture Awards 2017.

The White House is a generous modern home situated on a private estate in Surrey. Designed as a cluster of areas centred around an open plan space, the house has a strong relationship to a series of surrounding gardens. This modern home replaces a faux Georgian house on the Burwood Estate in Walton on Thames. The White House is a striking modern house, which at first glance does stand out amongst the crowd. But in many ways, within this leafy context, the freedom in form of a modern building enabled 3s to design a house which has an intimate relationship with changing light and its surrounding landscape.

3s Architects and Designers’ client had been living in the original property for six years before deciding to demolish and build their dream home. The original two storey house was long and thin, situated parallel to the road on an east-west axis. Unfortunately, it overshadowed its rear garden and open air swimming pool to the north and suffered from extensions which blocked the light and aspect to and from its west garden. The brief was to re-orientate the house to focus on a west garden, double its size, and maximise the connection to a sunny garden no longer overshadowed by the property.

The site is flat and benefits from a number of mature Oak trees and dense foliage along its northern, western and eastern boundaries, but is very open to the south and street frontage. The challenge was in creating a deep plan house which would feel light and airy and of a human scale. Inspiration came from the surrounding trees. The Oaks along the eastern edge forced the footprint away from the boundary for light and to step in and around large route protection areas. The solution was to articulate the building so it would not sit too far west compromising the main garden. Conceived as a cluster of enclosed and open plan spaces, the house opens up to a series of different gardens, providing light into the depth of the building and views out to the trees.

Rooms are grouped together to create areas of similar use, and to make the most of light and connection to each garden space. At ground floor, four enclosed spaces and a pool wing surround an open plan kitchen, dining and living area. A central stair and bridge connect a further four enclosed spaces cantilevered around two double height voids. The family living spaces focus around the open plan kitchen, benefiting from dual aspect and light. The kitchen is very much the heart of the home, located so the client could see the children playing in the garden or pool, and the living spaces. A leisure wing, including a basement gym and cinema room, changing and spa, and swimming pool sit to the north of the site. Functional areas including garage, boot-room and storage are located in an area near the front entrance.

Initially, 3s separated the spaces into four wings; master suite, children’s bedrooms facing the west garden, a guest wing with laundry and an office focusing around the eastern garden.  A slide concealed behind a secret door allows the children to slide down into the playroom. It was said that the greatest success of the project is the amount of light the design draws into the heart of this deep plan home, and the views out to the surrounding gardens and trees throughout the day. The double height open plan kitchen and dining space is very much the heart of the home. All floors surround this central space, so when moving from space to space you are very aware of the house as a whole and how it relates to the surrounding grounds. Whilst the house has a lot of glazing, it is not overly exposed, and its orientation provides both privacy and protection from the sun.  Spaces surrounding the open plan voids have more solid facades, and are grouped into similar uses. The use of large sliding doors enable the house to grow and be more open when required, or be separated to create greater sense of enclosure and intimacy.

The White House inherited its name from the original white house on the site. It seemed fitting therefore that this new house be finished predominantly in white render. Kebony timber cladding is used to provide a warmer tone to areas of the ground floor including the garage, allowing concealed doors and a more homogeneous facade.  This contrast in material and colour also helps to emphasise the cantilevers and legibility of the separate blocks which cluster around the double height glazed space at the centre of the house. Generous copper clad (later installed as aluminium) canopies bring a richness to the palette and earthy tones within its garden setting.

Whilst the building has a high level of glazing to provide light and open views, it is important the design be as sustainable as possible.  High performance double glazed solar glass has been installed to radically reduce the amount of heat gain, reflecting some 80% of UV solar heat.  Large canopies provide external shading, and the original design also included louvres and external screens for privacy and solar protection. This was later replaced at the client’s request by internal roller-blinds, which provide a second defence against direct sunlight. The house is naturally ventilated without air conditioning, but includes heat recovery to retain an ambient internal air temperature, and save on energy.

With the use of high performance insulating render finish and warm roof construction, the external envelope achieves u-values exceeding the building regulations to compensate for the glazing. Ground conditions did not allow for geothermal ground source. Instead a hybrid heating system with air to source heat pumps were installed as a renewable, which works efficiently with the high thermal mass and underfloor heating. During the design stage, 3s proposed a timber prefabricated structure, which would have offered many benefits. However, the client was keen for a more solid build favouring a steel and timber hybrid construction with thermalite blockwork walls throughout. The blockwork construction provides high thermal mass which works well with underfloor heating.