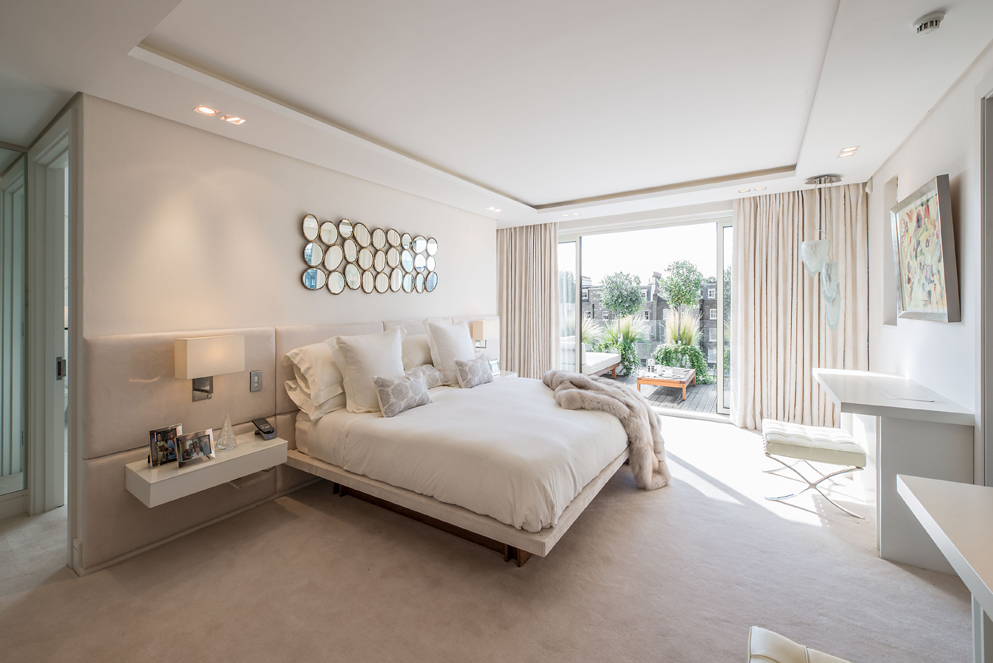 Anna Ghomi Consultancy has been shortlisted for the Residential £5 Million Plus (Project Value) Award in the International Design & Architecture Awards 2014.

The Chesham Street apartment was a sombre and tired property that suffered from a layout which was less than perfect. The hall was rather large and the bathrooms were too small. “Our brief from the Client was to transform the space into light and airy contemporary rooms whilst still maintaining a sense of tranquility.” explains Head of Design, Anna Ghomi.

The team decided to reduce the width of the hallway and add this extra space into the kitchen giving us a much larger area. The client agreed to let the designers keep the entire space in varying shades of white. This was achieved by mixing textures of white paper backed linen, white upholstered doors and architraves, leather and Armourcoat special wall finishes.

The designers starting point was the pale smoked oak wide floor boards which they discovered. The flooring established the continuity and flow of the entire project and they had the boards finished in white oil which gave a grape hue to the flooring and then established a colour theme, which was then continued throughout the entire apartment.

The original bureau in the living space was a dark veneer, and this only contributed to the darkness of the room. The designers had this sprayed white on site and faced in stitched leather and used mirrors placed at the back of the unit, thus creating light and giving a sense of depth. Chartreuse was selected as an accent colour in most areas.

“Bernard and I designed most of the furniture as well as the rugs and unit seating. The symmetry of the layout in the Drawing Room generates a sense of order and tranquility.” explains Anna.

The clean lines of the Master Bathroom were dictated by the wonderful Marike basin and Agape Bath, highlighted by the classic Tara taps in a Platine finish and complemented by the use of Volakas marble in a honed finish.

The Master Bedroom was finished in shades of white selecting a mixture of textures of linen, leather and lacquer thus maintaining a sense of tranquility. The team achieved a feeling of height by creating an illuminated coffer in the ceiling.

The whole apartment is both air conditioned and supports the latest in home automation by Crestron.