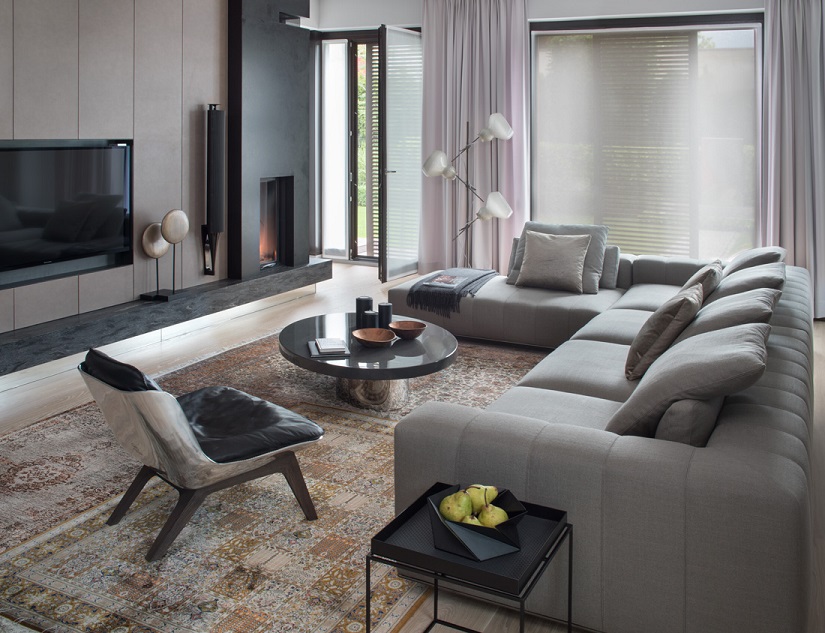 design et al are delighted to announce that Anna Koszela Interior Design Studio have been shortlisted for Interior Design Scheme – Europe   Award within The International Design and Architecture Awards 2018.

Anna Koszela had to modernize the house built in the 90’s. Instead of a balanced lifting, she proposed a radical renovation, which resulted in elegant, timeless interiors. Anna Koszela Interior Design Studio had cooperated with investors previously in the arrangement of the apartment in a prestigious skyscraper in Warsaw. The villa is the second property of the owners – a suburban safe harbour to which they come, when they want to take a break from work. It’s also the complete opposite of the apartment in which they live on a daily basis.

Anna Kosezela Interior Design Studio knew their likes and way of thinking, and thanks to the positive completion of a previous project, they had been asked to renovate the suburban residence. The owners didn’t want a revolution, but only a course correction. However, after the inspection, the architect proposed an extended version of the villa’s modernisation.

Some of the interior design elements were perfectly conserved but had become completely outdated. The red parquet with the tinge of dark bronze turning into red, was a dissonance in the idyllic residence. Others, on the contrary, still presented themselves very contemporary. The investors wanted to keep certain elements. They had a special affection for the curtains, Persian carpets and souvenirs purchased whilst travelling and a collection of vintage movie posters. All of them were found in the final project. Anna in an imperceptible way combined the new with the old, drawing from the previous project only what fits her concept. She proposed classic, timeless elegance in a contemporary approach.

In regard to the functional layout, the owners wanted a better solution for storage in the entrance area and preparing the house for guests visiting for a weekend. They also dreamed of an even greater integration of the house with the garden and contemporary versions of the attributes of the weekend home. Much of the work has been carried out on the ground floor of the residence. Anna Koszela Interior Design designed a completely new guest cloakroom, a hall with a mirror wardrobe and built-in storage systems. In the living room Anna Koszela designed a leather TV wall adjacent to the fireplace with a surround made of stone. A Neutral but warm colour pallet was used throughout as well as natural raw materials, soft, organic furniture lines, lighting and decorations.

The Dining area dedicated to entertaining was relocated into the orangery and became the heart of the home integrating the villa with the surroundings immersed in a well-tended garden, it became not only the entertain hub the clients desired but a retreat where you can drink your morning coffee or contemplate, admire the starry sky.