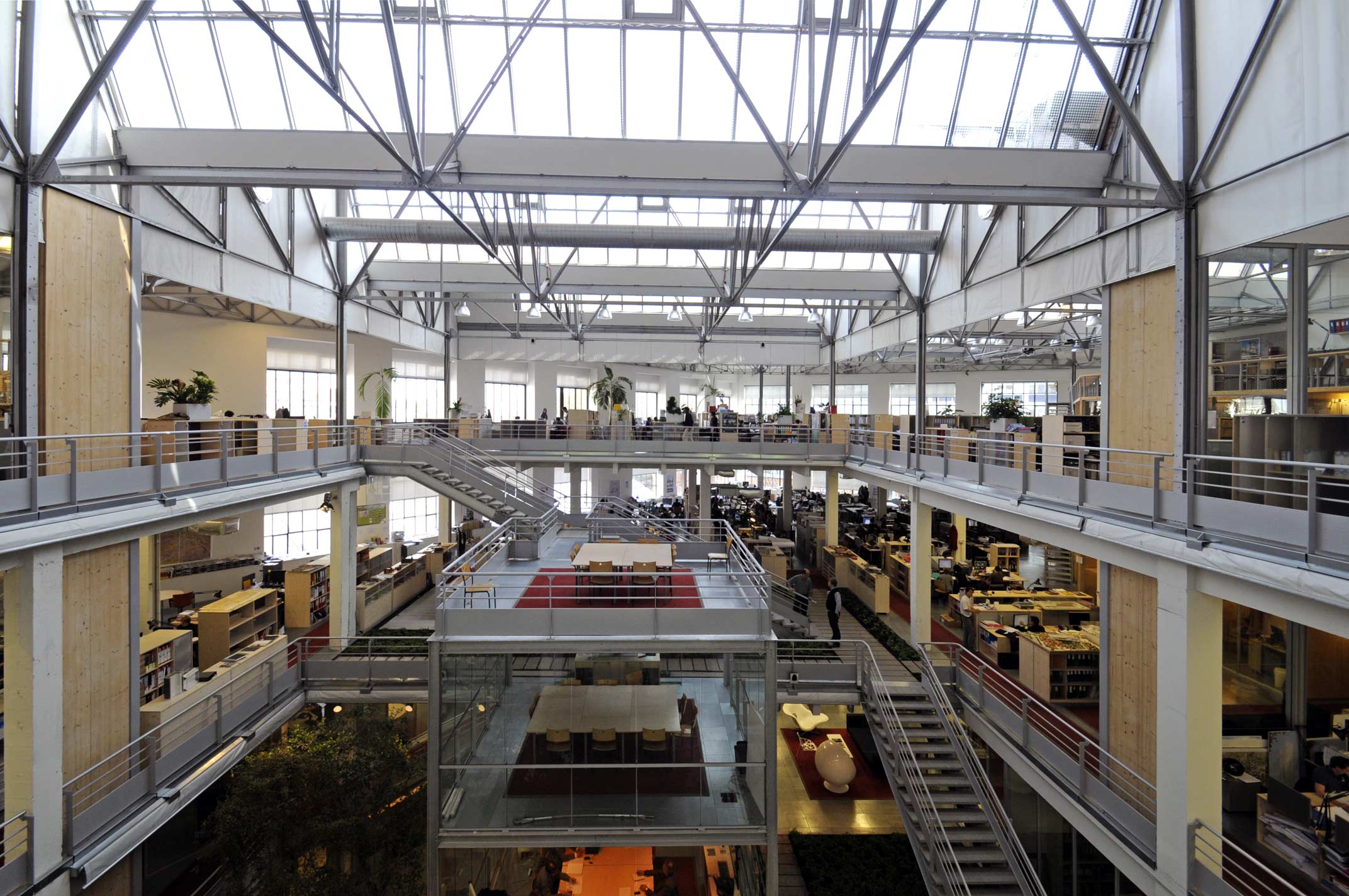 AREP celebrate shortlist success in the Office Category in the ID&A 2014 Awards.

The Panhard and Levassor workshops were partially demolished in 1967 to create the Olympiades district. They are the last remnants of a thriving industrial past, after the demolition of all the automobile plants in Paris: the Renault facilities on Ile Séguin, Citroën in Javel and part of the Panhard factory at Porte d’Ivry.

Over the 2007-2013 period, the building was extended and entirely refurbished by AREP to create 21,000sqm of office space as well as public facilities. In an environment dominated by the verticality of high-rise residential blocks, the project keeps the former factory alive, sustains its horizontality and unique architectural style and relies on the ornamental features of the existing façades: materials, dominant chromatic palette and contour line.

The brick façade provides a mineral base extending the current façades while the openings are in line with the rhythm of the original building. Each, partially or entirely, new façade forms a coherent whole with the reinforced mineral angles providing the framework for a more open sequence in the centre. Two large industrial-style statuesque boxes loom above the roof-top mouldings, clad in a double semi-transparent layer of glass and perforated coppery metal and echoing the tiles on the saw tooth roofs.

The adjacent cut of the Petite Ceinture (an abandoned railway line) was decked over to create a garden. Planted with ground covering plants, shrubs and trees, the garden slopes down from Rue Regnault to the new garden level, reflecting the characteristic bucolic image of the embankments of the Petite Ceinture, where vegetation takes over any available space. The design of the work spaces facilitate contact, interaction, formal and informal relations. This result is achieved through clearly designed spaces (atrium and vertical access flows), quality of the working environment (natural light, acoustics and ergonomics) and green spaces.

The building comprises two office entities surrounding the former factory. A parking facility for 49 vehicles was created in the basement of the southern end of the building. The latter’s independent entrance on boulevard Masséna bringing back to mind the stately entrances of former factories. It opens up on to the reception area, gutted out through two levels, which offers mezzanine spaces with a panoramic view over the Porte d’Ivry and Southern Paris.

The working spaces in the centre of the building occupy the former Panhard workshops and form an open plan office space which enhances communication while affording generous natural lighting. The heart of the building is its “green”, 4-storey atrium which links office wings together, thus encouraging collaborative and multidisciplinary work. The atrium is the nerve centre connecting the main common spaces.