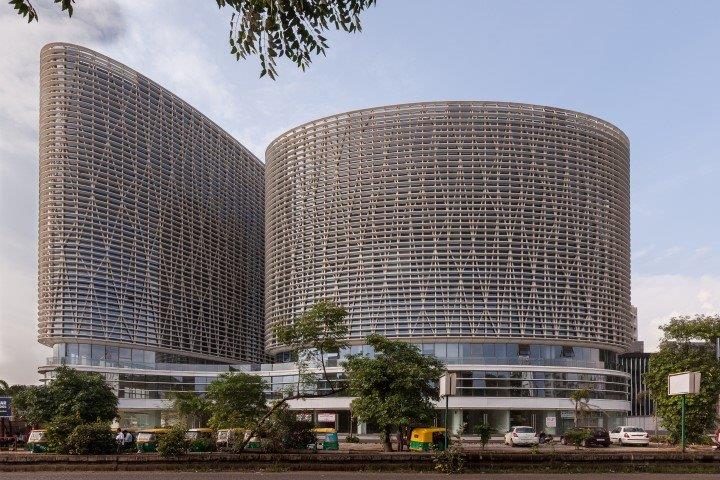 Blocher Blocher Partners are Shortlisted for the Office Award.

design et al are delighted to announce the successful shortlist for Blocher Blocher Partners for the Office Award.

Mondeal Square is a multi-functional building complex, located in Ahmedabad, one of the largest cities in India. It has the largest LED media façade in the country. The ensemble offers a total floor space of 17,000 square metres, of which 3,600 comprise commercial space, as well as ten storeys for office usage. During the day, the striking structure of the curtain façade defines the two buildings, however, at night, the ensemble unfolds a very special charm – thanks to India’s largest media façade.

The vertical struts and horizontal panes made of white aluminium profiles, serve not only for a long-range effect, but also for shade. As a contrast to the main façade, the rear side of the building is stylishly more restrained with a horizontal lamella façade. Inside, open exposed concrete ceilings and light grey tiles interplay with glass dividing walls, conveying a sense of minimalistic elegance and transparency. Wooden wall elements and the light interior provide the premises with warmth.

Mondeal Square is in a deeply symbolic location. Situated on a striking corner plot, by virtue of the elliptical shape of the buildings, two lifelines of the city are brought together. The buildings meet the passer-by with an inviting gesture – also because of the fusion of architecture and public space. The outdoor areas pick up on the height differences of the surroundings, and form an organic unit of plateaus and stepped landscapes. The planners, moreover, renounced an obvious, structural boundary and relied on palms as a natural green marker. They are at the same time a symbol for the rich history of the city.