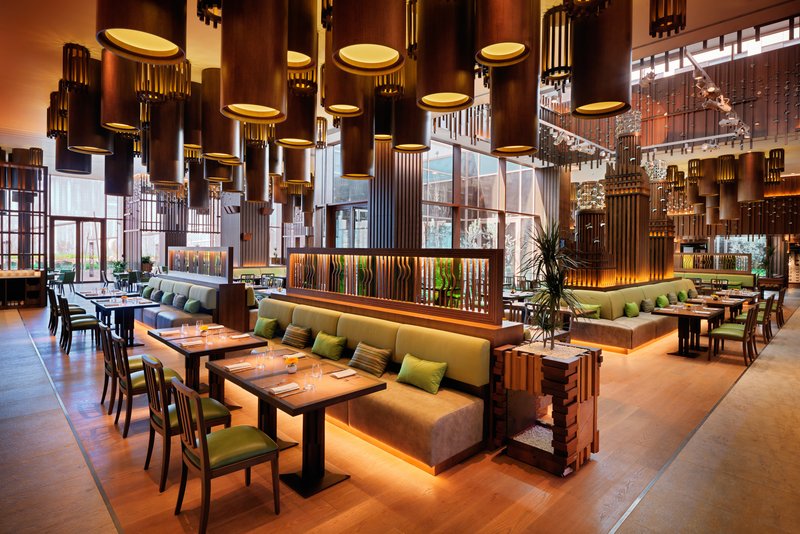 design et al are delighted to announce that Blue Sky Hospitality have been shortlisted for Restaurant Within a Hotel Award in The International Hotel and Property Awards 2017.

100 years story of the Caspian seaside told in three chapters, three dining concepts interwoven conceptually and physically as a cultural, culinary and environmental journey: Black City Cafe, Green House Kitchen and White City Lounge. The brief was to organise about 2000 M2 of internal and external dining space in several areas that can operate independently and in relation with each other, according to hotel occupancy and seasonal business levels.

The 800 key hotel has been built on post-industrial reclaimed land (nicknamed black city during Soviet times) as part of a wider regeneration project called “white city” which is an entire neighbourhood planned for the 21st century. The dining facilities have been conceived, designed and branded as one journey in three chapters, to reflect the various facets of this initiative, providing local customers and travellers an opportunity to interact and engage with the staff and location through the interior design and a large number of art installations created to raise ecological awareness.

Black City Cafe representing the industrial past of the oil and harbour industries, Green House Kitchen restaurant expressing the healing potential of the natural world and White City Lounge projecting the bright future potential of cleaner open seas to discover new horizons. The expansive volumes of internal and external spaces allowed the creation and installation of multiple large scale art installations including 500 resin salamanders and animals made of recycled cutlery in Black City cafe, 5000 aluminium butterflies and botanical sculptures within the Green House Kitchen, a flock of 36 kingfishers in flight and a dozen Caspian seal sculptures in the White City Lounge, amongst many others featured.

The guests enter first into the White City Lounge area, which is used as an all day bar-bistro-lounge, the next space is Green House kitchen a purpose-build timber clad pavilion with live trees open to the rain and elements as centre piece, where breakfast buffet and all day dining is provided. The final space is Black City Cafe which has a speakeasy industrial vibe for evening and late night drinking and dining. From Black City via the garden terraces guests can re-enter White City Lounge and exit the hotel, hopefully having learned something new.