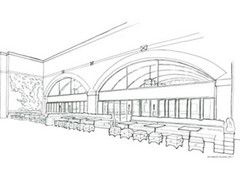 Brothers Danny and Kieran Clancy have unveiled plans to launch The Beagle, a new British Restaurant and bar this March 2013.

Taking its name from one of the locomotives that used to operate on the old North London line overhead, The Beagle will be set within three beautifully renovated railway arches – next to Hoxton Station.

Danny, who is also a founder and director of the recently opened Bonnie Gull in Fitzrovia and Kieran said, ‘We chanced upon these three beautiful railway arches next to Hoxton Station and were blown away by the site. The arches are in immaculate condition and have some beautiful features  perfect for a restaurant and bar. We’re thrilled to have James Ferguson heading the kitchen and considering both site and location we aim to become both a dining destination as well as a neighbourhood favourite.