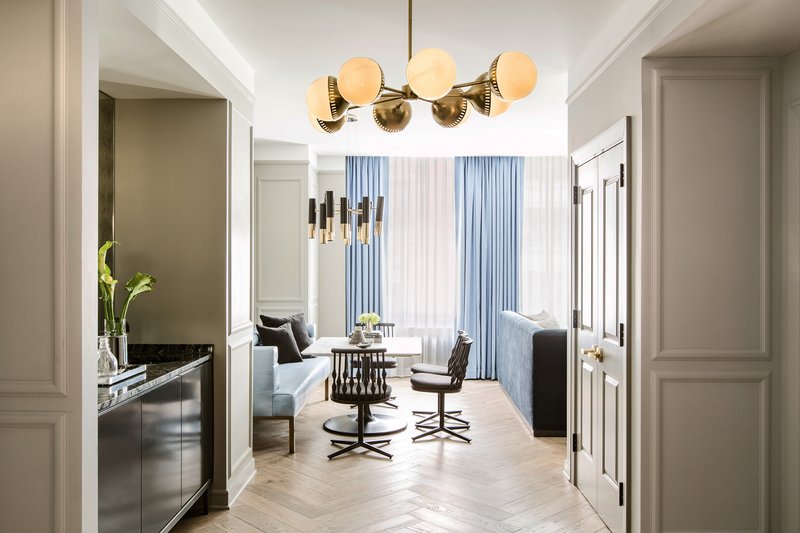 design et al are delighted to announce that Beleco have won Hotel Over 200 Rooms Americas & Caribbean Award in The International Hotel and Property Awards 2017.

The Los Angeles based interior design firm, Beleco, were asked to transform a turn of the 20th century office building in downtown Chicago to a boutique hotel. The Gray hotel by Kimpton- named for its original Georgia Gray marble- blends contemporary elegance with historic charm. Inspired by the finely-tailored suits of London’s Savile Row, delicate suit fabrics, velvet and lace were used to balance the cold, hard interiors with softness and sophistication. Shades of blue and rays of light whisper serenity throughout the hotel’s 293 rooms while lovingly-curated artwork punctuates the walls with subtle, historically-solid humour.

Three areas were looked to for inspiration from Beleco; The building (architecture and history), the city (culture and history) and fashion (inspired by the bespoke tailoring found in the high-powered professionals working in the neighbourhood). The style mix of Beaux Arts and Art Deco create a grand environment on the 1st and 2nd floor of the building. It gets more restrained on the upper floors, but the original black and white marble finishes in the elevator lobbies of the guest floors were kept and restored. To avoid becoming too masculine, predictable and boring, the designers added lace patterns to the mix. One of the guestroom’s main features is a large globe light hanging from the ceiling next to the bed. It can be seen from the street. The cast resin is made out of individual lace doilies, creating the lace pattern effect they were after. The organic lace pattern of the guestroom carpet is the first thing the guests will see.

Since the building’s past was an office building, the design was inspired by men’s suits… tailored, classic, modern, crisp, well-appointed, elegant with just a bit of daring as a gentleman may introduce with a tie, pocket square or wild-patterned socks. The suit’s fabrics were used as a guide for material selections- tweed, flannel, herringbone, wool, felt & velvet are some of the classic materials and textures that can be found throughout the project. A place that is well-groomed and pays attention to details. Although the spaces in the lobby area are refined and elegant, an industrial screen was introduced to reference the city’s industrial history. It also helped to make sure that the environment does not become too precious. The interplay of the strong, tough and industrial materials against the delicate and lace is an important theme. Beleco avoid trying to simulate the existing architecture in areas where it had been removed throughout the years and opted for a clear transition from the restored original spaces to the newly designed ones. Inspiration was taken from the tailored details of the existing to create classic modern environments. The restored existing spaces and the new ones speak their own language, but quality of details and finishes make them come together as one. The design creates a relaxed luxury feel, making the spaces both elegant and inviting.