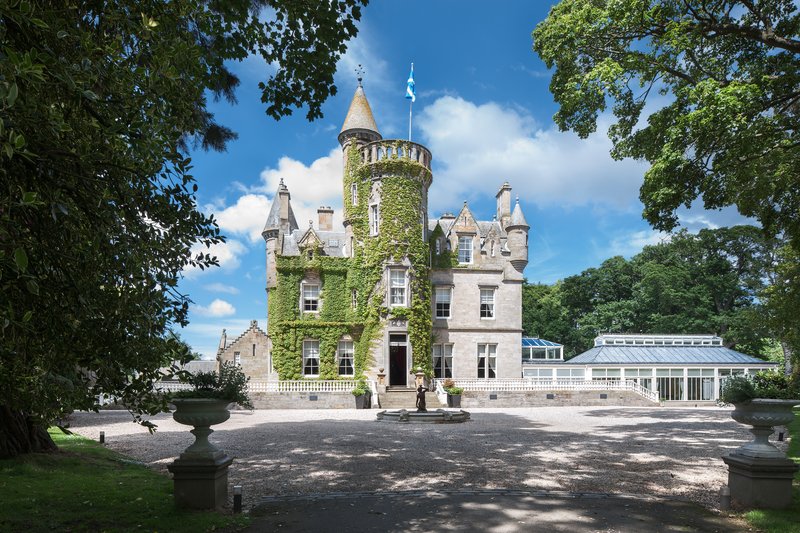 design et al are delighted to announce that Carlowrie Castle have been shortlisted for Hotel Under 200 Rooms Europe Award in The International Hotel and Property Awards 2016.

The designers were asked to create a hotel in Scotland that was like no other Scottish hotel using materials and trades from around the UK and further afield. Designed and constructed in 1852 by eminent Victorian architect David Rhind, Carlowrie Castle is a striking example of a Scots Baronial mansion with grand stone façade, pitched dormers and high parapets. Since it was built in 1852, Carlowrie Castle had only been used as a private home until it was turned into a luxury boutique hotel which opened in 2015.

All the rooms are individually styled, spacious and have breathtaking views of the 32 acre castle grounds. The Carlowrie public rooms include a lounge which has an exquisite monochrome marble floor and a stunning Italian chandelier to set the mood in the lounge, it is an ideal retreat to soak up the peace and tranquillity that abounds at Carlowrie. The bar area has tall ornate mahogany bookcases, decorative cornicing, open fireplace and newly laid tumbled herringbone parquet flooring which blends in with the new built bar and gantry. The newly built 1500 square foot Orangery has tumbled parquet floor and picture windows on all sides that romantically diffuse light throughout the space and is the perfect backdrop for weddings and special events.

The bedrooms are fitted with handmade beds and bespoke cabinetry throughout with soft furnishings and lights purchased from around the world. Speaking about renovating the 19th-century building, Andrew Marshall, the owner explains “it was a real labour of love for myself and the design and build team, the house has such a wonderful history, we wanted to preserve its heritage and treat the re-design sensitively so none of this narrative would be lost. We are very happy with the outcome and feel that we have created a truly unique hotel on the door step of Edinburgh.”