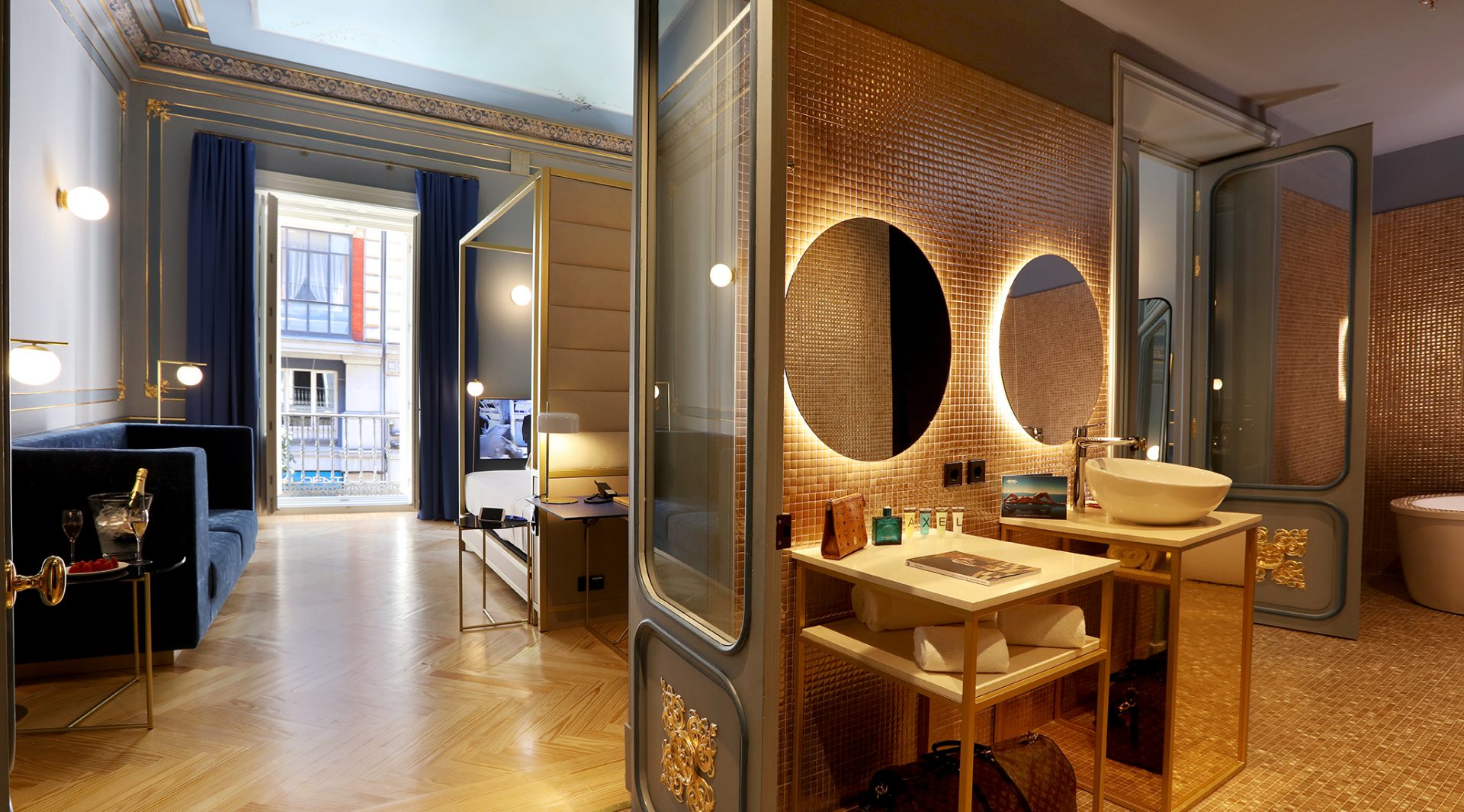 design et al are delighted to announce that El Equipo Creativo have been shortlisted for Hotel Under 200 Rooms – Global Award in The International Hotel and Property Awards 2018.

The design of the AXEL Hotel on Atocha Street in Madrid superposes a series of historic references forming a complex and explosive tandem. One of the starting points is the privileged location of the AXEL Hotel in the very midst of Madrid’s literary neighbourhood, today the epicentre of the city’s most cosmopolitan environment. This neighbourhood was also an important cultural centre during Spain’s “Golden Century”, a period in which art and literature flourished, giving its name to the area, a place where the most illustrious men of letters, such as Cervantes, lived and wrote. It was precisely here that the first “Comedy Playhouses” appeared. An important role in the design choices was played by some of Madrid’s most traditional and popular characteristics as well as some of the most well-known visual elements such as those related to the bull fight, the “mantilla” or the gypsy aesthetic in general.

The main objective for El Equipo Creativo was to create a hotel which exuded an atmosphere of liberty and diversion with a certain disruptive touch which invited a varied clientele to enter the public areas of the hotel to enjoy the gastronomic offer. In order to achieve this atmosphere, the most important strategy in the design is the use of colour, an element which accompanies us throughout all the areas of the hotel and which is applied with different character and material nature in each zone.  Another of the principal strategies is the introduction of graphic and textual elements reminiscent of the neighbourhood’s literary past.

Posters, brightly lit with cinematographic and musical references to the “Movida Madrileña” together with mannequins and other flashy elements invade the entrance way to the hotel and its reception area, welcoming the guest to a carefree and festive atmosphere… and it certainly does. The introduction of texts, words and phrases in the form of bright lights and neon’s makes reference to the literary past of the neighbourhood, but with more popular messages and winks/ insinuations. It is precisely in the courtyard of the building where this “popular literature” takes on importance and climbs up the patio walls like an echo of the theatrical voices of the “Comedy Playhouses” of the Golden Century.

Located on the first floor were the original noble rooms of immense patrimonial value and containing a great variety of finishes and colours. The common denominator which exists in all of them is the golden decorative detail on the walls, ceilings and handicrafts. The new distribution has converted some of these rooms to public lounges and others to suites, emphasizing in both cases the common denominator, gold, which will be the colour of all the new pieces of furniture in these spaces. In the design of the rooms once again there is a mixture of some of the visual references previously mentioned, but with the new objective of creating a space which invites one to both rest and play.