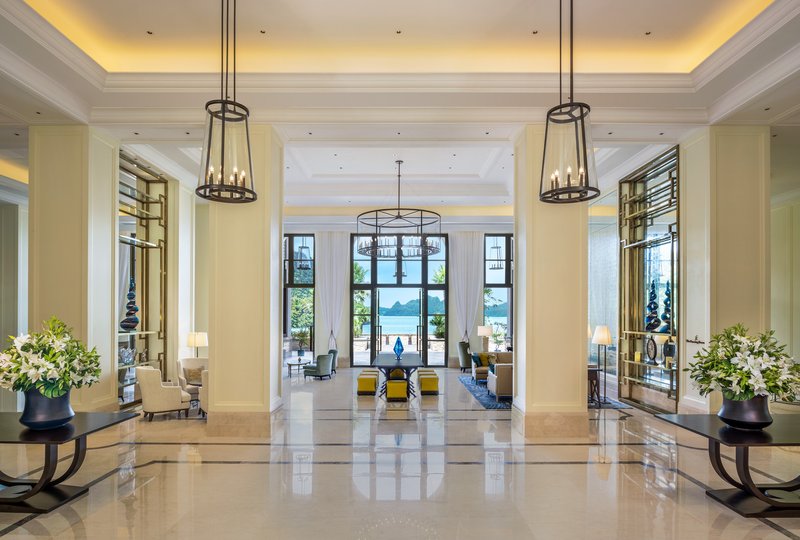 The client’s vision was for a grand mansion house that offered a unique alternative to the more traditional laid back resorts that can be found on the island. Although a relaxed environment was still key, the focus was on a more glamorous setting reminiscent of the European Riviera with fresh, light interiors and grand open spaces. G.A. Design’s overall design inspiration was ‘Rainforest meets Riviera’. The surrounding landscape really lends itself to that concept, as the resort sits between dramatic mountains with virgin rainforests on one side, and tranquil blue waters. On the one hand Langkawi offers a hideaway, an escape from modern living, steeped in natural splendour, amidst ancient mountains, and on the other hand it is the epitome of modern glamour with its international yacht club and marina, and world famous golf club. In order to achieve the style of a mansion house the designers worked closely with the architects, Gensler, to create large volumes and open spaces with captivating views of the lagoons. The common vernacular architecture and thatched roofs were avoided in place of a unique and dominating structure that made a statement of quality and suggested permanence and longevity.

It was important however, for the architecture of the resort to blend against the natural landscape and so the buildings become slightly softer and more influenced by nature as they draw closer to the sea, giving the resort a more organic feel. The overall interiors are fresh and light with colour schemes that have been influenced by the sea and the island vegetation that surrounds the resort with punches of ocean blue and canary yellow adorning the cushions and accessories in the lobby lounge. Within the guestrooms, a slight difference in styling is offered, with more formal and grand rooms located inside the main mansion building and more relaxed rooms outside located in the lagoon areas and above the sea, all with extensive external balconies so guests can make the most of their beautiful surroundings.

Inside the majority of the guestrooms the beds are orientated towards the sea helping to focus the guest’s attention on the proximity of the water and again the scheme of nautical blues and tropical flower hues can be found in the beautiful fabrics chosen for the cushions. Beautifully detailed rugs influenced by Batik have been hand-tufted and hand-carved in the styling of the island’s traditional craft. The design works well as it fulfils the brief to create a grand residential mansion house set against the backdrop of a tropical island resort. The contrasting styles work together and feel natural. G.A. Design International Limited’s approach has created a unique interior which constantly surprises and delights the guests as they undertake the ‘journey’ of relaxation. Beginning at the impressive arrival through to the less formal sea villas, the layout and interiors becoming more relaxed as the guests move throughout the hotel towards the lagoon area.