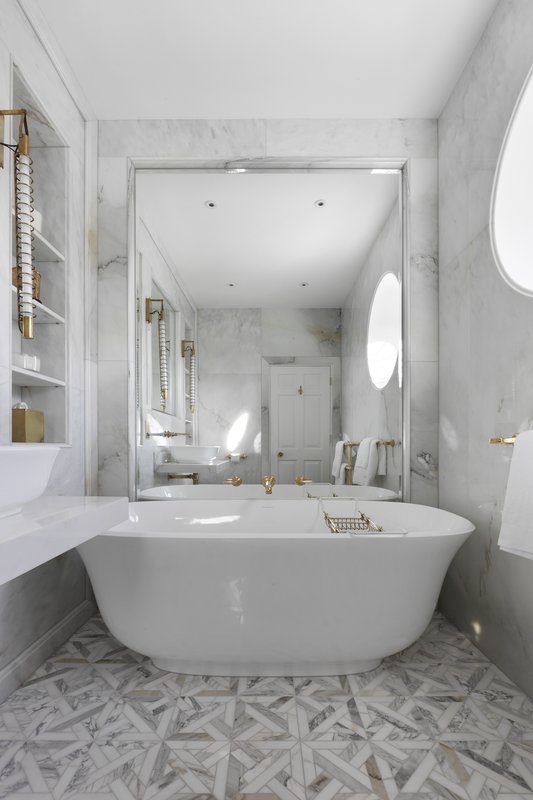 design et al are delighted to announce that Interior Desires have been shortlisted for a Bathroom Award in The International Design and Architecture Awards 2016.

The client asked the team at Interior Desires to re-imagine the existing bathroom ensuite which had a rather uninspired design. The client wanted a simplistic bathroom with a sense of luxury and a nod to the location.  The designers used a Calacatta Delicato marble supplied by Via Arkadia which is quite soft and feminine. Rather than cladding the marble flat onto the walls, they decided to introduce a series of frames around the perimeter of the walls, mirrors and shelving to give the room some character and excitement.

To further add to the mix, the marble was cut into a geometric pattern for the floor tiles to give it a modern edge. The large mirror behind the bath reflects the marble and automatically makes this modestly proportioned room appear bigger. The free standing bath and basin are from the Victoria and Albert Amiata range and the bath filler and basin taps are from Waterwork’s AW Atlas range. For the Waterworks fixtures and accessories the designers opted for an un lacquered brass finish which tarnishes over time to add a vintage edge to the bathroom.

The fixtures have a slightly industrial design that adds a beefiness to the soft and feminine room. The room has a round mirror which wanted to accentuate by framing the edge with the marble. The towel radiator also in an unlacquered brass finish was from Sterlingham. The pièce de résistance of this room is the pair of Vintage c 1950’s Franco Albini wall lights which have a unique and beautiful design. For protection the fluorescent tubes were covered in a clear film to avoid any accidents from water splashing.