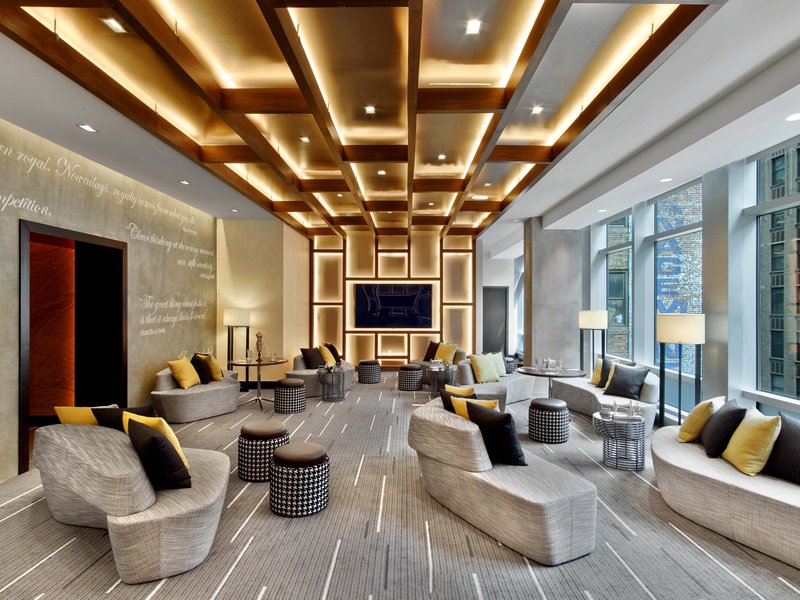 design et al are delighted to announce that Jeffrey Beers International have been shortlisted for Hotel Over 200 Rooms Award in The International Hotel and Property Awards 2017.

The property captures the intoxicating energy of midtown Manhattan and the exciting flavours of the artistic industries that surround it. Renaissance Hotels’ new U.S. flagship property, the Renaissance New York Midtown Hotel opened in Manhattan on March 21, 2016. The hotel personifies the brand’s ‘Fearlessly Chic’ global design philosophy and ‘Business Unusual’ outlook by catering to the next generation business traveller who seeks adventure and a connection with the local neighbourhood on every business trip. Award-winning design studio Jeffrey Beers International (JBI) captures the authenticity and glamour of the city through innovative technology never before showcased in a New York hotel.

To bring the design to life, Beers collaborated with Roger Parent of interdisciplinary technology firm Réalisations Inc. Montreal. New York City’s first “living” hotel is comprised of sensational, ever-changing digital experiences inspired by the fashion and artistic industries in the neighbourhood which are an integral and informative element of the design. Specifically designed to interact with visitors from the moment they enter the hotel, the property features ambient intelligent corridors that respond to human movement, digitally enhanced elevator banks, and a never-before-seen Discovery Portal Powered by Time Out that showcases hyper-local neighbourhood guides on a user-friendly digital alcove to be accessed with the point of a finger or tap of a toe. A four-story LED digital clock at the top of the building will also bring the hotel to life and will add a beacon of light to the city’s skyline for all to enjoy.

Using New York City as his muse, Beers’ vision was to capture the energy of the neighbourhood by juxtaposing high-low design components, such as smooth millwork and polished marble against the rough texture of exposed concrete walls, to create elegant yet edgy public spaces and guest rooms. The purposeful disparity of materials was new to Beers, known for his work at properties around the world including Miami’s Fontainebleau, Daniel Boulud’s db Bistro Moderne in New York and Singapore, and the One&Only Ocean Club in the Bahamas, making the Renaissance New York Midtown unlike any project he has worked on.