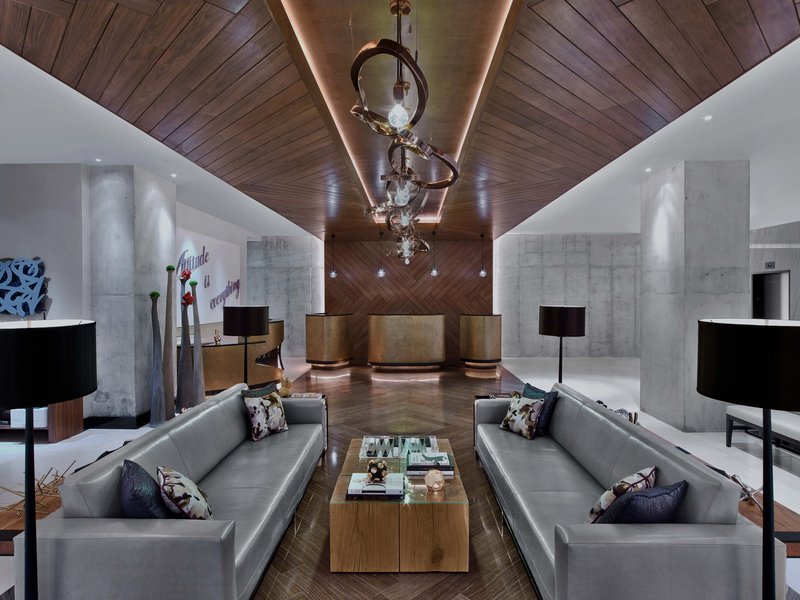 design et al are delighted to announce that Jeffrey Beers International have been shortlisted for Lobby/Public Areas Award in The International Hotel and Property Awards 2017.

The Renaissance Midtown Hotel was a project unlike any Jeffrey Beers International had embarked on. Using New York City as his muse, Beers’ vision was to capture the energy of the neighbourhood by juxtaposing high-low design components, such as smooth millwork and polished marble against the rough texture of exposed concrete walls, to create elegant yet edgy public spaces and guest rooms. To bring the design to life, Beers collaborated with Roger Parent of interdisciplinary technology firm Réalisations Inc. Montreal. New York City’s first “living” hotel is comprised of sensational, ever-changing digital experiences inspired by the fashion and artistic industries in the neighbourhood which are an integral and informative element of the design. Specifically designed to interact with visitors from the moment they enter the hotel, the property features ambient intelligent corridors that respond to human movement, digitally enhanced elevator banks, and a never-before-seen Discovery Portal Powered by Time Out that showcases hyper-local neighbourhood guides on a user-friendly digital alcove to be accessed with the point of a finger or tap of a toe.

To fully integrate the local Garment District into the hotel design, Beers concepted an art program based on literal references to this surrounding industry. With the help of art marketplace Indie Walls, Beers commissioned original works from contemporary artists like Andre Woolery, whose piece “Buttons To Buttons” uses varying sizes of custom-coloured red buttons pinned to a painted canvas to create a tactile, fluidly abstract pattern. Additional contributions by Andre include “Pencilscape”, the Manhattan skyline made entirely from pencils, and a Diane von Furstenberg quote constructed from push-pins titled “Attitude”. Brooklyn-based artist Abby Goodman created a piece called “The Devil Wears Nada” with more than 50 real, painted stiletto heels. Stepping off of the elevator onto the seventh floor meeting space you are greeted by Abby’s piece, “Rising Stay”, made of collar stays. Sculptural metal pieces by local NYC artist Carlos Mare (a.k.a. ‘Mare 139’), whose unique style of three-dimensional graffiti has been exhibited in galleries around the world, are showcased in the public spaces.

Vibrant photographic collages by urban photographer Nicolas Ruel are projected onto exposed concrete panels which flank the front desk, depicting various New York City scenes. Surprising design elements are found throughout the hotel, from flirtatious graphics at the back of each guestroom closet, to inspiring quotes in the bathrooms. Life-size images are etched on the back walls of the elevator cabs and each time the elevator doors open on the ground floor, guests will be treated to specially-curated digital imagery showcasing local artists and neighbourhood experiences. Timed to mirror the opening and closing of the elevators, the projected digital displays will always be evolving and the hotel will be visually different on each and every visit. On the sixth floor guests will find a sleek lobby bar, library lounge, a clandestine DJ booth and club lounge for Elite Marriott Rewards members and preferred guests. The hotel offers 4,500 square-feet of meeting space which can be separated into smaller conference rooms with glass air walls. Floor-to-ceiling windows will offer magnificent views of the city, while stylized inspirational quotes from fashion greats such as Coco Chanel.