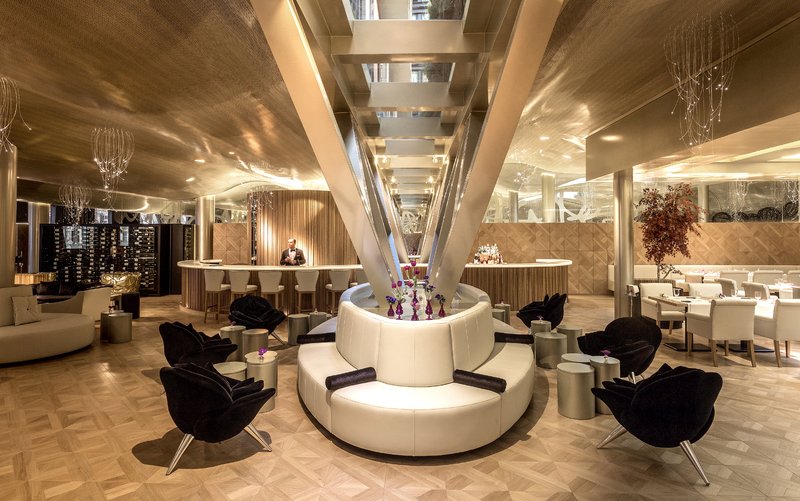 design et al are delighted to announce that Mercè Borrell & Factoria UDA have been shortlisted for Hotel Under 200 Rooms Europe Award in The International Hotel and Property Awards 2017.

An imposing pre-modernist building houses The Monument Hotel, which consists of a luxurious hotel and Lasarte a three Michelin- starred restaurant. The starting point of the design was the decision of maintaining and making visible the most important elements of the existing pre-modernist building. The Monument Hotel is actually housed in an imposing mansion of neo-Gothic inspiration, the Enric Batlló House, which was built between 1895 and 1896 by the pre-modernist architect Josep Vilaseca i Casanovas. The Monument is located on the iconic Paseo de Gracia, the most elegant shopping street in Barcelona and opposite the celebrated Gaudi’s La Pedrera building. The original façade has been completely restored, recovering the wooden carpentries and the window shutters.

The Hotel Monument is one of the most artistic and aesthetically significant façades on Paseo de Gracia, striking for its bright polychrome resulting from the combination of various materials such as brickwork, stone, ceramic, wrought iron and the above mentioned wood. From the street, two main original entrances have been maintained, which now give access to the hotel and the restaurant Lasarte respectively. The building is structured around two main elements; the inner courtyard and the main staircase, which provide access to the lobby and rooms. The ground floor has been designed as a big single space, free of conventional pillars and with big inverted pyramids designed to support the building’s weight. Metallic wavy ceiling contributes to unify the space and gives the appropriate acoustic comfort.

The three Michelin-starred restaurant Lasarte has been properly planned to allow the chef Martín Berasategui and his team to work in optimal conditions, not only giving the kitchen the required dimension and equipment but also controlling the tempos and movements. It also has a private lounge located in the mezzanine floor, from where the kitchen can be seen during the meal. The emphasis on light and the use of fine materials throughout the building give the hotel the required elegance and comfort. Especially in the design of the rooms the choice of materials and lighting was very important. The combination of warm materials such as timber or silk with the existing modernist elements and textures want to make the space a unique experience.