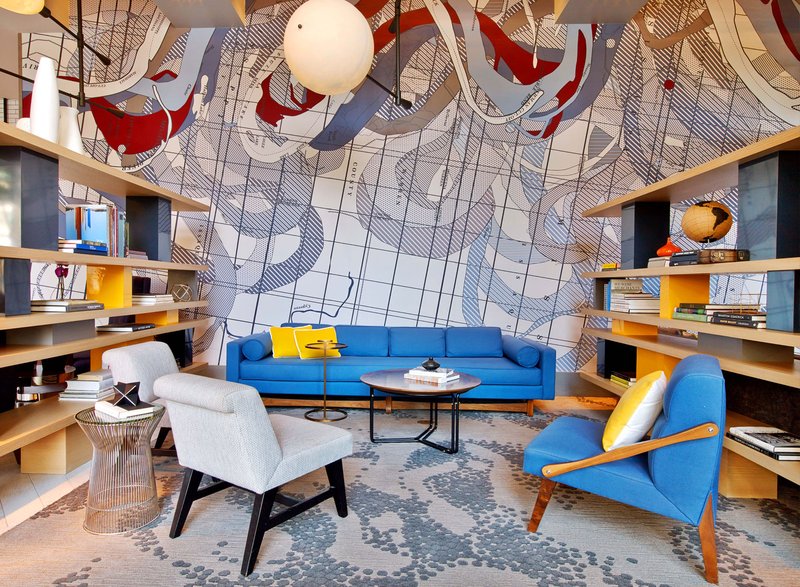 Mid-century Parisian chic meets New Orleans. For this hotel renovation, the design team reflected the vibrancy of the city, its art, and its music, while being true to a chic, French brand that celebrates world travel. New Orleans has strong ties to France and Paris to begin with, so there was a lot to work with there – the designers worked in the mid- century point of view, as well as Parisian motifs and furniture design. They were also able to work in that vibrant colour and energy that you take away from New Orleans, graphic wallcoverings, using cartography as art.

For the guest rooms, the designers found a city map that shows all the roads and streets in the French Quarter with a small dot for each of the parties that takes place during Mardi Gras. It was made into a graphic wall covering that wraps the ceiling of the room. On the main lobby wall was made a graphic from a flood zone map of the Mississippi River that charted a study of currents, there is also a chalk drawn map of the French Quarter on the elevator doors. It was important to promote local artists who reflected the spirit of contemporary New Orleans.

The textures used speak to the different elements you see on classic mid-century furniture pieces. Meyer Davis wanted to create a beautiful blend of different materials. The brand itself is heavily influenced by different cool shades of grey with this vibrant punch of colour. They used a very brand focused colour palette – keeping very cool, muted greys and having these vibrant pops throughout.