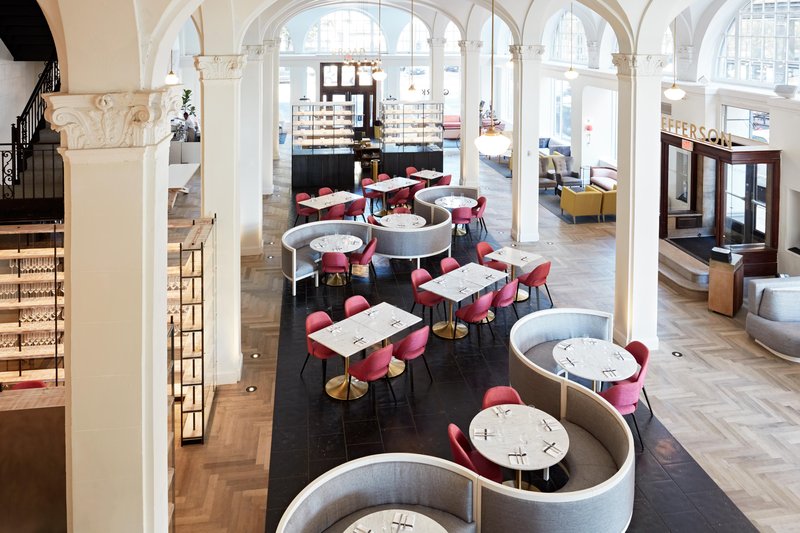 design et al are delighted to announce that Poesis Design have been shortlisted for Hotel Under 200 Rooms Award in The International Hotel and Property Awards 2017.

The hotel began as a gallery, which existed as a pioneering tenant in the city’s fledgling arts district. The gallery focuses on local artists from a nearby university’s Art programme. Recognising this future, and joining it with the building’s past life as a department store, Poesis Design created a number of opportunities to display art, from the lit modern glass, wood and steel display cases in the lobby intended to house artistic work such as a collection of white painted top hats, to the numerous large blank walls on which to hang big art, to the elevator vestibules on each floor intended to function as mini-salons. The hotel is intended to serve as the backdrop, the container, for art.

The existing building is an architectural gem built as a department store in the Italian palazzo style in 1916. The goal became to insert a quiet but firm 21st century layer of history that respects the past and makes it stronger by contrast. The primary space, which became the lobby and restaurant, consists of a 3×6 grid of column bays surmounted by magnificent groin vaults arching to 24’ high. Lighter whimsical elements play amongst the gridded columns, from the serpentine dining booths to the sculptural elements stationed about, such as the front desk, private dining pavilion, luggage storage units, and beverage bars. Each element provides the framework, the place, for the events of the day to play out. The central chandelier’s lightness further accentuates the drama of the vaulting. The flooring in the lobby was selected to differentiate spaces, set off the whiteness of the historic architecture, and lend a sense of timelessness to the new. Pink is the signature colour of Quirk Gallery and now Quirk Hotel.

A key aspect of the project are the curved banquettes in the restaurant/lobby. These pieces allow for an intimate dining experience in a communal setting. This serpentine seating snakes through the rigid column grid both to show their own temporary nature in the face of the grid’s relentless permanence. The design of Quirk Hotel works so well because it is everyone’s guilty pleasure. It hits the right balance of clean modern expression and fun whimsy. It is pink and bold yet strong. It’s very feminine and very masculine. It takes itself very seriously and not at all. Hotels are a great escape, a fantasy, a dream, a home away from home. They can be a catalyst for change to a neighbourhood, a city, a mindset. Since its opening, Richmond now has become a mecca for Brooklyn hipsters to retreat for a weekend in “the old South.”