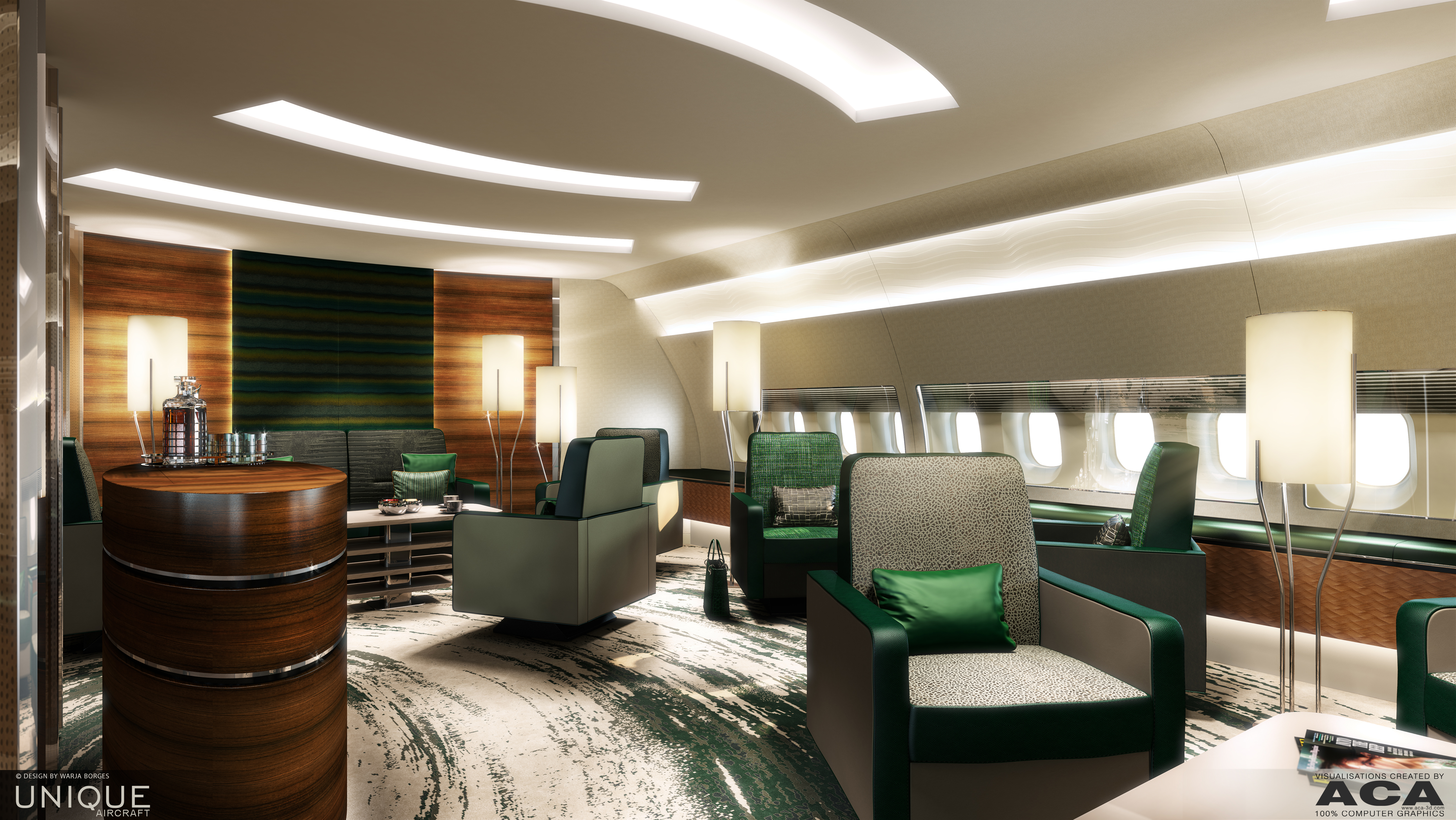 Luxe et al are delighted to announce to Unique Aircraft have been shortlisted for Private Jet Design – Concept Award for The International Yacht & Aviation Awards 2017.

Unique Aircraft’s design concept was developed in co-operation with Boeing Business Jets and visualised by ACA-3D with the goal of highlighting the interior possibilities enabled by the BBJ 777-300ER.  With the widest and largest cabin of any twin-engine aeroplane flying today, the BBJ 777 freed the design from the traditional train car like aisle and cabin layout. The end result was a varied and functional VIP aircraft concept that provides superior comfort for all those aboard what is one of the furthest flying aircraft in the world. There were four main tasks involved with the design, the first was to emphasise the ample area (278.8 m2) and height of the B777-300ER. The second was to include a wide variety of spaces, including the currently trendy VIP mini-suites, lie-flat seating for all aboard and a grand lounge. The fourth task was to appeal to a global audience and the final task was to ensure all those aboard, from Principal, to VIP guests, to staff, have a comfortable space to spend ultra-long 10,000 nm flights. Unique Aircraft achieved these four tasks with the following designs; instead of building a series of boxes inside the cabin, the layout separates areas, and functions with modules and or special features. The design intentionally alternates between narrow and spacious to exaggerate the effect of the 5.9 m wide fuselage on the passenger as they enter each new zone.

Secondly, starting from the front, the layout consists of a private area with bedroom and bathroom, then a grand common open space followed by a separate dining/conference area in the centre of the aircraft. Aft of this room, and past the cupola shaped lavatory and storage complex, is the VIP guest area with private apartments and a more intimate lounge/movie room. Upon reaching door four, passengers will find a large galley, and immediately beyond, private First Class compartments. The very rear of the aircraft features generous lie-flat business class seating, bringing the total passenger count to about 75. Thirdly, because of the significant volume of the B777, Unique Aircraft wanted the cabin interior design to be lively and stimulating. Thus, Unique Aircraft   eschewed two tone wood and leather and instead looked to lounges of contemporary luxury hotels for inspiration. The timeless design makes use of floor to ceiling panels covered with a variety of fabrics, wood, stone and paint. In addition, transparent panels are used to separate areas, while at the same time maintaining an airy atmosphere. The selected colours are a homogenous mixture to excite one’s senses, greens for balance, calm, regeneration. Brown woods for safety and reliability. Light warm greys for clarity and orange-reds for vitalisation and re-energization. The design pays special attention to the latest technical innovations, including whole cabin humidification, curved / hidden OLED monitors, a full cook top for true restaurant cuisine and mood lighting coupled with time release fragrances.

The aircraft welcomes you on board with an elegant, symmetrical entrance hall. The symmetry of the room is accentuated by a centre throw rug on the wooden floor and two eye-catching fabric panels forward and aft. The geometric theme is continued on the ceiling, which features a classically inspired multi-cylinder chandelier. Ceiling height transparent dividers separate the lounge area from the hallway. Too large to expect everyone to converse together all the time, the grand lounge is designed around three seating groups.  These separate but slightly overlapping seat groupings are flexible get-together areas, each illuminated with floor-mounted lamps that provide warm, even, shoulder level light. The modern swirling carpet design circulates around the centre monument which hosts a hidden pop-up bar. Cabin-wide curved walls forward and aft are equipped with OLED monitors hidden behind moving fabric panels. Recessed light cut-outs in the headliner mirror the curvature of the walls without impacting ceiling height. The primary feature of this almost oval-shaped room is the 6 seat centrally mounted dining table.  Several minimalist overlapping circle fixtures provide concentrated lighting over the dining area. The space is purpose-built for dinners and meetings, both occasions where the focus is inward, toward the group or project. As a result, the lighting fades rapidly towards the sparingly mood lit walls, covered in dark fabric to further enhance the effect.  Although the room is fully enclosed, the dining area makes use of priva-lite filled cut-outs in the hallway wall. These panels can be fully opaque, or completely transparent, allowing passengers to experience the full width of the 777 from within this separate space.

Two curved light strips in the ceiling create a striking opening into the aircraft-wide guest lounge. Large L-shaped divans both left and right invite people to get-together and relax. Equipped with two 55” monitors, this area can also be used as a movie room. For mid-movie snacks, the buffet at the aft end of the room can be served directly from the galley behind. The bedroom is dominated by a king-sized bed framed by a ceiling height headboard and two monuments with softly lit cut-outs for the Principle’s most treasured items. Situated slightly forward of the bed, a comfortable two place seating area provides a retreat space to the VIP. Continuing the theme of open space, a ceiling height curved glass wall with a 65” OLED monitor provides the necessary separation from the dressing area without making the bedroom feel cramped. In the dressing area, a 3m stowage wall and the oval cabinet provide ample storage for personal belongings. A vanity table at the inboard wall completes the arrangement. In lieu of physical separations, ambient lighting in the different areas creates isles of functions throughout the suite. Hidden behind the stowage wall is the private bathroom.  More spa than bathroom, it features a huge curved double-sink washstand and back-lit swivelling mirror. The large walk-in bisazza covered shower with steam bath functions and a bench inside finishes the spa look.