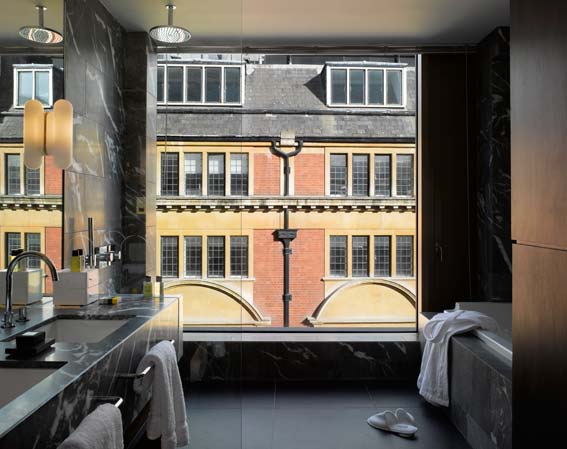 Conran and Partners have reached the shortlist for the International Hotel and Property Awards 2013 with South Place Hotel, shortlisted for the Hotel 50-200 Rooms Award.

South Place Hotel, just off Moorgate in the City of London, features 80 rooms, three bars and two restaurants – all designed by Conran and Partners. The brief for South Place was to pay homage to the site’s geography.

The hotel is sandwiched between the slick high rise of the City and the East End, London’s resurgent creative hub. Art is a major focus, with hundreds of works by London artists throughout. Key installations include a six-story aluminium sculpture by Grace & Webb, which hangs above the ‘secret garden’ terrace bar, and Zemer Peled’s spectacular ceramic installation – winner of the inaugural South Place Hotel Art Prize.

The hotel’s private meeting rooms feature nods to the world of espionage – in the 1920s, a Soviet spy ring met just around the corner. The residents’ games room, Le Chiffre – named after the Casino Royale villain – features eye-catching backgammon panelling, and a bookcase full of spy novels. Next door, Kuryakin – a fictional Russian spy – has a spectacular red interior, including a high-gloss banqueting table and red leather chairs.

The bedrooms offer counterpoint to the theatre of the public spaces. Decorated in muted palettes, the focus is on quality materials, intelligently-designed furniture and the carefully-curated art. Overall, the hotel succeeds in marrying East End edge with City polish, creating a unique hotel proposition at the very heart of London.