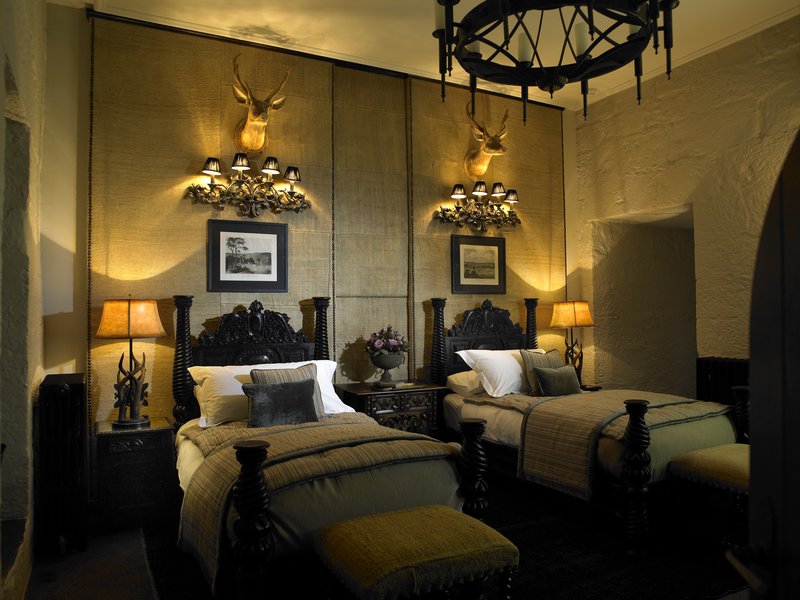 design et al are delighted to announce that Design Direction have been shortlisted for Hotel Under 50 Rooms Award in The International Hotel and Property Awards 2017.

Built in 1430, Borthwick Castle was the final home of Mary Queen of Scots before her execution. Now transformed into an exclusive 10 bedroom destination combining historic grandeur with contemporary luxury. Borthwick Castle is now a major talking point in the luxury destination market, set apart from other venues by its rich history combined with the quality and exclusivity of its finishes, created specifically for this project by a worldwide network of artisan makers. Design Direction owner, Melanie Brown, travelled the world to source furniture, wall coverings, and artefacts in keeping with the castle’s long history, including antique hemp discovered at Maison&Objet in Paris, hand-dyed especially for this project . Melanie also sourced antique rugs which she had hand-dyed by artisans to colour match each room scheme

Melanie briefed each artisan maker and then travelled to see each item being made, travelling nationwide, and throughout Europe, she spent six months sourcing 150 Scottish regimental buttons which she then passed to the artisan furniture makers at George Smith to include in a pair of purple Mulberry velvet-covered loving seats for the Stateroom. Many items were sourced in Edinburgh, including cushions by an artisan maker McKinely & Moth. There are convex mirrors above every bathroom door which prompt guests to dip their heads and beautiful faux flowers throughout from Holland, sourced and arranged by artisan florists at Secret Garden, Newcastle-upon-Tyne. Melanie commissioned oil paintings for every room, including portraits of Mary Queen of Scots and her husband Lord Bothwell, Sir Walter Scott and his wife Charlotte.

The gin bar and whisky bar in the Stateroom were designed by Melanie and hand carved by artisans to echo the history of the castle via countryside motifs. The logistics of moving furniture and fittings into a 15th Century castle with only spiral staircases was extremely difficult. Furniture had to be hoisted in through a balcony window to the State Room, most of it in pieces to be assembled on site. The hand-carved wrought-iron chandelier in the Great Hall, for example, carved with Tudor motifs of flowers, wildlife, acorns, deer and twisted vines, arrived in 40 large boxes. Some bathrooms feature book-matched marble – ie, marble sheets, cut to transport into the castle, and then matched on site after a tricky delivery up the narrow stone spiral staircases.

Crests from historic figures are embroidered into the Mulberry velvet-upholstered dressing table chairs in each bedroom, including Mary Queen of Scots, Lord Bothwell, and Oliver Cromwell. The colourways used throughout are inspired by popular colours in Tudor times, including ochre and bronze, lime, sage and emerald green, purple and red. Many items of furniture, including beds and chests, are hand-carved and inspired by historic artefacts, including the bed in the Mary Queen of Scots room, which is inspired by Mary’s bed at Holyrood House, Edinburgh, and the bed in the Oliver Cromwell room, inspired by Cromwell’s own bed, which survives to this day. In the Stateroom you see a hand-carved crest above the door of each bedroom, inspired by the crest of the person for which the room is named. Borthwick Castle’s walls are built of local quarry stone, every stone featuring the mark of its stonemason. Family marks are apparent, and interestingly, considering the castle took only 11 years to build, marks disappear at each level, suggesting that masons died early, possibly on site.

Stonemasons at Borthwick also worked on Rosslyn Chapel. The remnants of 15th Century frescoes remain in the Great Hall, where Melanie installed special hidden lighting to highlight them. The frescoes depict banqueting scenes and read: “Ye temple of honour” and “Ye temple of religion on other side”. The bedrooms’ antique mirror frames were used with state-of-the-art touch-lighting systems to allow five-star contemporary functionality with antique fittings . Fireplaces were re-instated throughout, while pipes are run through the original sewage ducts.