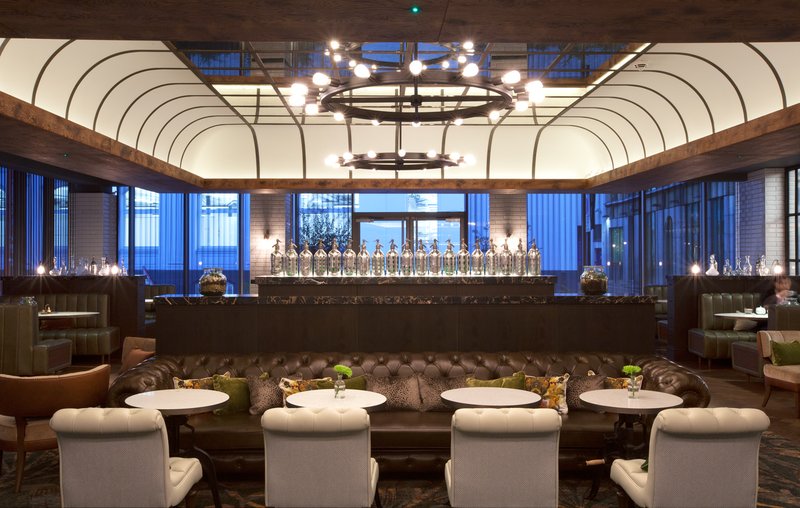 design et al are delighted to announce that Dexter Moren Associates have won Bar/Club/Lounge Award in The International Hotel and Property Awards 2017.

The Distillery at the Hilton London Bankside marks a design departure from the traditional aesthetic of the brand. The concept embraces its neighbourhood heritage as the primary source of inspiration. The Distillery artisan bar offers a lunch food kitchen and an impressive drinks and cocktail menu, doubling up as an event space in the evening for live entertainment or private parties. Working in conjunction with Twenty2Degrees as lead interior designers for this flagship Hilton London Bankside hotel, the client detailed a restaurant & bar (R&B) brief covering materials and performance, but Dexter Moren Associates ultimately had the freedom to develop their design concept.

The Distillery occupies a site that used to house a renowned essence factory; the Stevenson & Howell’s Standard Works. They distilled and blended essential oils and manufactured essences, flavourings and garnishes during the 1800s, and this narrative plays a major role in the design of the space. There are hints of ‘old world charm’ detailing around the bar décor, such as the glittering display of seltzer bottles and coloured glass soda siphons from Argentina. The elongated rich green leather Chesterfield sofas and fumed oak parquet flooring resemble the elegance of a 1930s gentlemen’s drinking club. These elements are complemented by the earthy masculine hues of the bronze effect detailing throughout and the vibrant William Morris inspired carpets. The space is harmoniously balanced with low level ambient decorative lighting throughout, while the barrelled ceiling provides a bold statement and height to the bar. Reclaimed finishes take precedence over artworks, such as the unique ‘penny wall’ which tells the story of a coin pressing factory that once occupied a nearby warehouse.

The ‘penny wall’ on the left of the bar holds over 16,000 pennies meaning their weight meant the wall had to be reinforced to support the load. The British pennies date back to as early as 1860 and in places a story through time can be traced including pennies from Queen Victoria and the Suffragettes. Each one was hand-applied on site by artists Diarmuid Byron-O’Connor and Dominic Lewis. There is a space for more to be added by willing guests. Researching and unearthing historical facts about the Bankside area proved fascinating and very rewarding for the interior design team and they wanted to share these stories with the bars guests and clientele. The Distillery creates a buzz by acknowledging the modern pang for individuality. The design shows that it understands its visitor and invites them to discover more about the history of the city and the identity of this particular river side location. The reduced ceiling height at the centre of the seating area was tackled by adding a domed mirrored ceiling in the centre of the lounge, creating the illusion of space. The seating is carefully thought out with intimate booths juxtaposed with larger chesterfield sections for big parties. The soft lighting from the old decanter installations help to create a soothing ambience at the bar.

The strategic shelving behind the bar offers an impressive display of spirits to the customer and potentially entices them to try something new. From a hotel guests point of view the Distillery bar marks an evolution from the traditional hotel branded bar, offering an artisan approach and specialising in local craft beers and over 50 hand-picked gins. It also offers guests a relaxing lounge area that is ideal for business or pleasure. From a local resident’s perspective, the separate street entrance to the bar enhances the connection to its community, by creating an active frontage on the primary pedestrian route from Southwark Underground to Tate Modern. Having its own independent entrance encourages people to treat the Distillery as a destination bar with a food kitchen offering and an impressive cocktail, gin and craft beer menu, inspired by the history of the neighbourhood. This outdoor pedestrianised area also doubles up as an attractive patio area for eating and drinking al-fresco in the summer months.