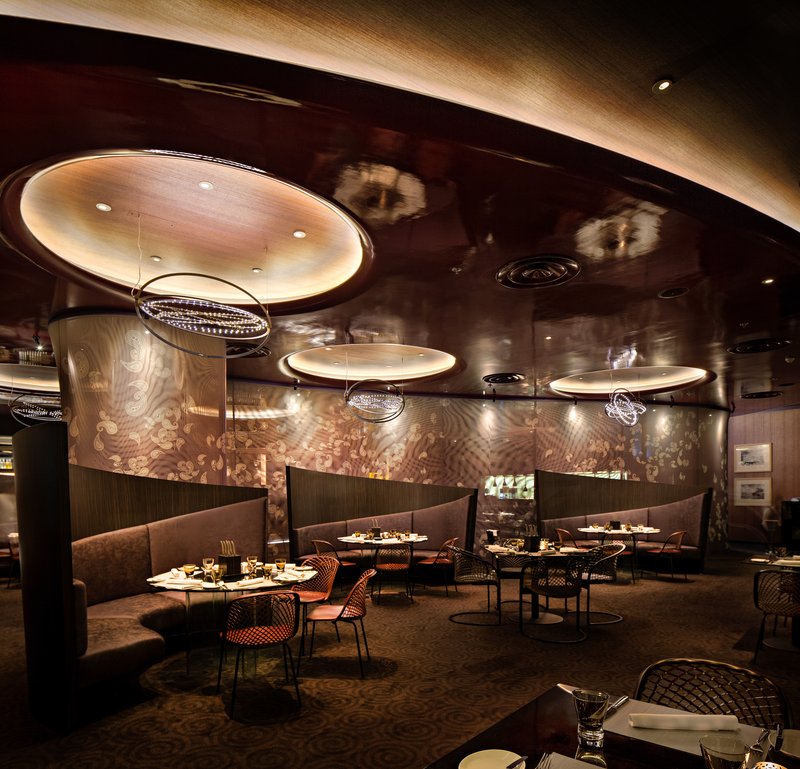 design et al are delighted to announce that Ethospace have been shortlisted for Restaurant Within a Hotel Award in The International Hotel and Property Awards 2017.

Flames, in look and feel, takes its inspiration from the passion of merchants that traverse the Silk Route. In context of an exquisite dining experience, Flames is inspired in design concept by the exotic delights from the allure of spices and the mysterious charm of finishes expressive of delicate paisley accents, oriental silks and ebony that make their way from Cathay and India to the Middle East along the Silk Route. Since the days of the Roman Empire, the Middle East as a cross-cultural hub where treasures of the exotic Far East culminate to spread forth its richness of merchandise and spice. Together, they seek to appease the insatiable appetite of a Western Civilisation craving for the taste and sensory experience of a world of culinary, material and literary wealth otherwise beyond their reach.

From the far pavilions of Cathay and India, the Arabian merchants of pleasure made their way to the Arabian Peninsula through the ancient route on caravans laden with exotic riches. Gathering at the exotic bazaars of the Middle East, the treasures possessively guarded, find their way eventually to the West. In between, the delights from discoveries reflecting the finesse and luxuries of unique lifestyles are as appreciated in the Arabian world that birthed the ambience that inspired the spirit of Flames today.

Within this exotic design tale of “a 1000 & 1 nights” that extend to the art of fine dining, Flames exudes as romantic an ambience as the “the most decadent but delightful desserts in Bahrain” served to its discerning epicurean and connoisseur. In concept, it stays true to the theme of the Art Rotana as a poetic and romantic expression of a Middle East within a futuristic context. As part of a whole that adds to the sum total of its parts, in design spirit, Flames holds true to the bold vision of the Art Rotana – to reach out for a Middle Eastern presence in context of an inspiration from creating “an Oasis in the Sky.”