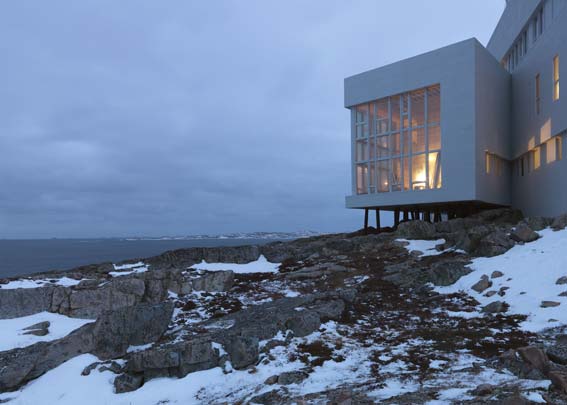 The Fogo Island Inn, Newfoundland, (submitted by Shorefast Foundation) has reached the shortlist for the Hotel under 50 rooms Award in The International Hotel and Property Awards 2013.

The Fogo Island Inn is a public building for Fogo Islanders with 29 rooms for guests varying in size from 300 to 1,100 square feet. Located between the communities of Joe Batt’s Arm and Barr’d Islands and facing the North Atlantic, the 40,000 square foot inn and 6,000 square foot outbuilding is an “X” in plan: a two storey volume, running East to West, and containing the majority of the building’s public spaces and a longer four storey volume, running South-­‐West to North-­‐East, containing the guest suites and other intimate spaces and is parallel to the coast.

Design Brief: The Fogo Island Inn was commissioned and is owned by the Shorefast Foundation, a Canadian charitable organization established to foster the cultural and economic resilience of this outport community that traditionally had relied on the fishery for all of its needs. Fogo Island is a welcoming wilderness on the edge of the North Atlantic. The inn allows guests to experience the unique landscape, culture and nature of this place from the comfort of a beautiful contemporary inn with the aid of welcoming community hosts.

Favourite / key aspects of the project: The public areas on the first floor of the inn include an art gallery curated by Fogo Island Arts, a dining room, bar and lounge, and a library specializing in the local region. The second floor includes a gym, multipurpose space for private functions, events, and meetings, and a cinema. The cinema programming is a partnership with the National Film Board of Canada. The fourth floor roof deck, with outdoor hot tubs overlooking the North Atlantic, surrounds the sauna building designed by Rintala Eggertsson Architects of Bodø and Oslo, Norway. All guest rooms face the ocean with the bed placed directly in front of the view. Guest rooms are located on all four floors with 21 rooms, complete with wood burning stoves, on the third and fourth. The ceilings of the fourth floor rooms follow the slope of the roof. Because of this, the largest three rooms, at the far East end of the building, offer full double height space complete with a second level sleeping area. The placement of the outbuilding, 60 feet to the South of the Inn, creates an exterior courtyard space at the main entrance, and thusly mirrors the traditional relationship of the area, deeply routed in local building culture where sheds, stages, and stores (storage buildings not shops), are all integral components of the greater property, or premises as it is locally referred to.

Responsible, ecologically minded design and energy efficiency were primary goals of the Inn and have been articulated throughout the building’s envelope and operational systems. Paramount to the Inn was conservation of resources including energy, water and natural materials.  Contemporary in design, the inn is explicitly tied to Fogo Island and the architectural traditions of Newfoundland outports in the way it meets with the natural landscape, the use of materials throughout and, most importantly, the pragmatic attitude and collaborative process used throughout the design and construction of the inn. Like the traditional houses, stages and stores in the neighboring communities, the building is perched on the rocky, uneven natural landscape and supported by stilt legs (called shores) which also help to reduce the impact on the existing environment, rocks, lichens, berries and many other low growing plants native to the site.

The knowledge and skill of local carpenters and craftspeople informed the details used throughout the buildings. The Aesthetics of Outport Design workshop organized by Fogo Island Arts established the process by which the interiors of the Fogo Island Inn would be designed. This workshop invited artist, architects, historians and local builders and makers to learn about and discuss traditional Newfoundland Outport history, design and furniture as well as the design process and practices of outside contemporary artists so that these questions were asked: What was the spirit, character and soul of traditional outport furniture? What is contemporary outport design? And how will a guest know they are waking up on Fogo Island? The success of the interaction led to the decision that all the interiors should be designed collaboratively using the materials, details and skills of Fogo Island and Change Islands.

From August 2010 to February 2011, Studioilse worked with Shorefast and Saunders to produce a book of design guidelines for the interiors. They proposed a short list of furniture and object designers who they felt would enjoy and add to the previously agreed collaborative approach. From February 2011 to now, the designers have worked directly with Shorefast and the men and women to design and produce the furniture, millwork and majority of textiles in the inn. This collaborative process reinforced the intention that the materials, history, craft techniques and aesthetic of Outport Newfoundland are the starting point for what continues to be a long term and ongoing collaborative project between contemporary designers from North America and Europe and the men and women makers and builders of Fogo Island and Change Islands.