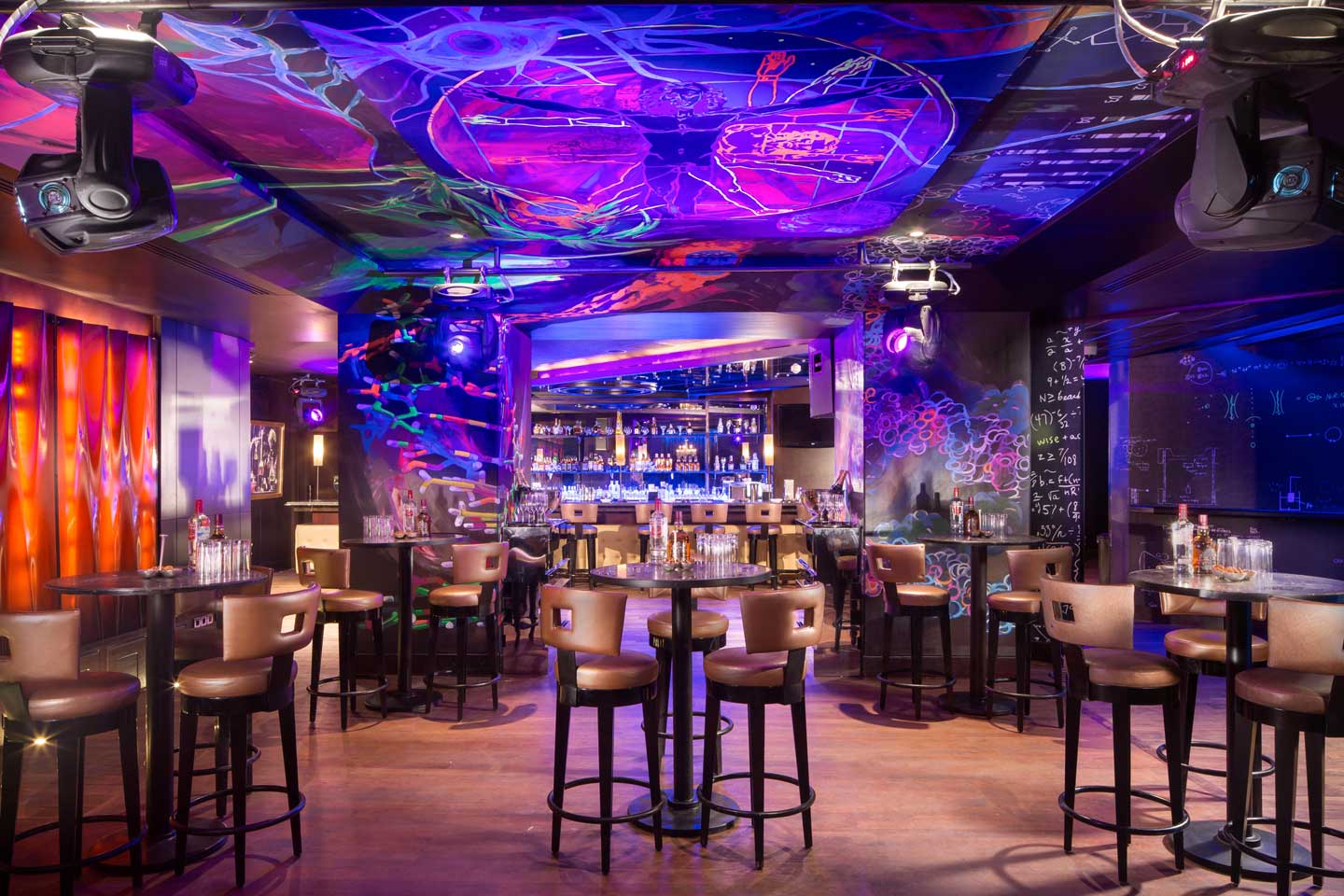 The team were appointed to “Create a Buzz in Town” and develop a Unique & Iconic identity for the O Bar, located at the Fairmont Nile City Towers. The main intention was to transform the existing Cigar Lounge into an Impressively Gorgeous VIP Venue.

The revolution in Egypt has pushed people to come up for their ideas, their passion and their rights. People are now sharing their vision and opinions in many different ways: Passionate speeches, alternative music styles, impressive street art, etc. This inevitably leads to confrontations, conflicts and chaotic scenarios. The people of Egypt have all been extremely affected by the Revolution, with some properties having been physically attacked.
When designing the O Bar, GG & Grace International decided to create a unique identity in line with the actual mood of the people in Egypt. The team created a story of “The Crazy Scientist” who, in search for the perfect algorithm for a brighter future, tagged all walls and ceilings with mathematical algorithms and chemical formulas. This chaotic and colourful design reflects in a way the mind-set of the people and the alchemy created by the interaction of all elements in the bar: High-energy music, Love & Passion, Hip & Trendy people, Cocktails & Smoke, Party!

The team were given only 20 days to conceptualise & build the new identity of the O Bar, so they decided to strategically concentrate their efforts on 3 main interventions: Special Wallpapers, Eclectic Furniture & Unique Artworks. Since Hosni Moubarak was ousted in February 2011, a long line of works of art have flourished in Egypt’s streets. Radical publishing and pamphleteering, street art and graffiti have thrived, even appearing in deeply conservative neighbourhoods. Egypt’s growing group of young artists are engaging actively in the revolution, becoming agents of change in society. GG & Grace International met with young artists that were active during the revolution and explained their intention to reflect the mood of the people with highly expressive artworks on some key walls and ceilings of the O Bar. The concept should be non-political and that’s why they developed the story of the crazy Scientist. The idea was to catch their amazing energy and need of expression and transform it into non-political, colourful and high energetic artworks.

The team also decided to cover most of the walls with black wallpaper; this creates an amazing contrast with the colourful graffiti’s. In addition all the walls have been tagged with white mathematical formulas and algorithms, giving the impression that the Crazy Scientist used all the walls as a blackboard. Most of the people will not understand the formulas, this represents the complexity of the world we live in. As most people have different opinions, visions and desires, the team decided that each piece of furniture would be different as well. Chairs, tables or lamps are all Unique and Iconic, so guests can choose their preference. In addition, they carefully selected an eclectic collection of iconic pieces that fits the concept of the “Crazy Scientist” with metal structure and leather upholstery.

The design is a reflection of the actual mood and spirit of the people in Egypt. It is energetic, chaotic, colourful, crazy, unique and new.