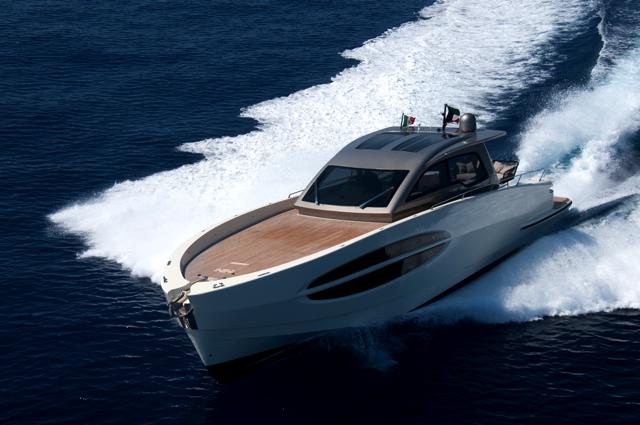 Giulini Ben Brahim Design and Engineering have been shortlisted for the International Yacht & Aviation Awards 2014. Their project, First Koot, will compete in the Power Boat up to 25 metres category.

The First Koot was welcomed as the first Day Cruiser in its size offering wide exterior and interior open spaces, good for families and work meetings as well. Built in Bizerte, Tunisia the team was led by Italian Designer Francesco Giulini. The exterior and the interior are a project by Arch. Francesco Giulini, whereas the water lines are designed by the renown Naval Engineer Sergio Cutolo. Eng. Sami Ben Brahim was the Project Manager in the Magic Yachts Shipyard.

With its 16,5 meters in length and a beam of 4,9 meters, First Koot is a yacht which offers unique uninterrupted spaces: the absence of cabins is compensated by a large lounge area directly connected to the upper deck communicating to the outdoor area and the sea. The theme of large spaces is continued outside as well: the transom is completely open to the sea and only three steps divide the cockpit from the large swim platform. The upper front deck, dressed in teak, completely unobstructed, becomes an extensive and comfortable sun tanning area.

First Koot has a V shape planing hull with variable deadrise angle : it is powered by n. 2 MAN R6-800 and can reach a cruising speed of over 30 knots. Two fuel tanks for a total of 2400 liters will provide an autonomy of approximately 300 nautical miles.