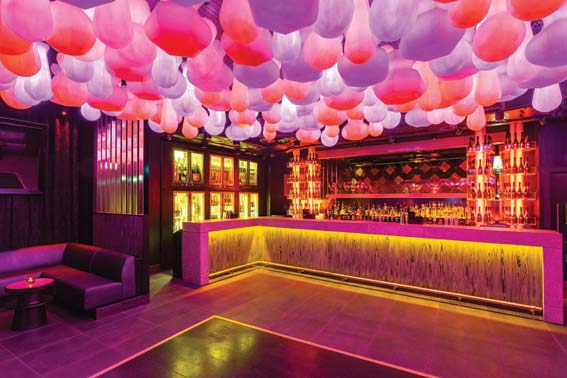 A glamorous private members nightclub occupying 3500 sq ft of the ground floor of the Liverpool Hilton has reached the shortlist of the International Hotel & Property Awards 2013.

With a strong individual identity that captures the high rolling, exclusive extravagance characterised by nightlife destinations in the jet-set hotspots of Las Vegas, Miami and St Tropez, Playground is set to put Liverpool ONE in a position to rival some of London’s hottest late night venues.

Appointed by George Panayiotou of property developers The Ability Group, London hospitality designers Blacksheep who pride themselves on being creatively courageous are the design daredevils behind Liverpool’s new ‘Playground’.

The club’s decadent interior has been carefully designed to communicate a sense of luxury, including polished metals, metallic leathers, faceted mirrors and an interlinking geometric design inspired by the logos of heritage fashion and luggage brands. In the VIP area, which can be viewed from either side of the club, reflective walls created from glossy copper cladding form a signature theme.

Over a third of the club is dedicated to the members only area. Here, an elevated lounge at one end is divided from the main body of the club by a 18ft long bar. A distinctive, mood-enhancing central lighting feature – a constellation of 150 pulsating lanterns is suspended above the main bar area. Each bespoke moulded pendant contains LEDs, which have been designed to create a multitude of colour, rhythm and pattern possibilities. Extensive acoustic lining has also been fitted in tandem with the latest cutting edge sound system to provide an unparralelled sound experience.

After a significant reinvention of the city over the last ten years, Liverpool’s new luxury club is a statement for the city, attracting nightlife gentry from across the UK and marking it out as an international nightlife destination. Playground was shortlisted for the International Hotel & Property Awards 2013 in the Bar / Club / Lounge category.