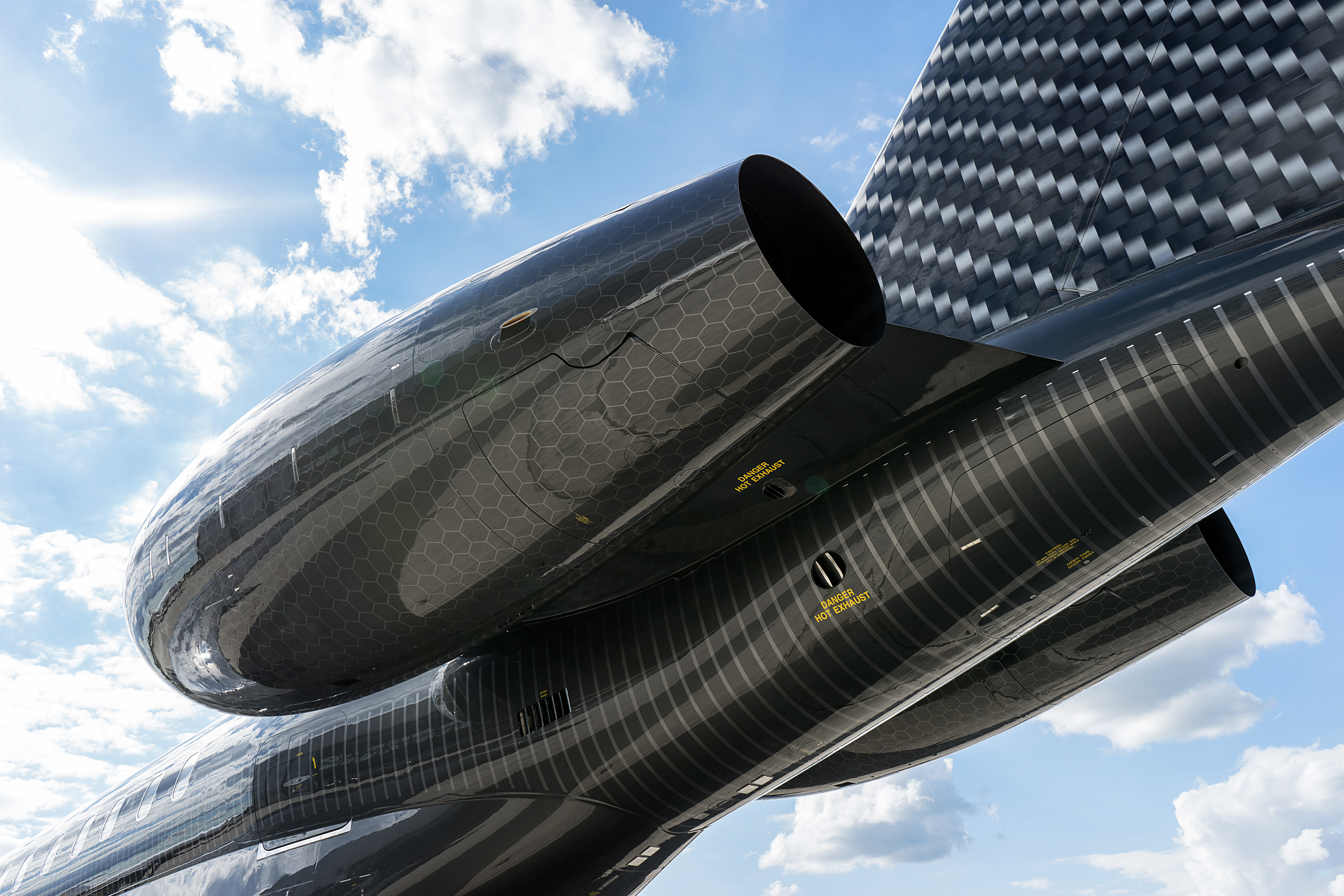 Luxe et al are delighted to announce that Happy Design Studio have been shortlisted for the Private Jet Design Award in The International Yacht & Aviation Awards 2018.

Happy Design Studio presents ‘Carboneum’ a private jet exterior design applied on a Bombardier Global 6000. Hand-painted, precise customisation graphics were used throughout, highlighting the intricate patterns found in high performance, fibre-reinforced technology materials, such as carbon and honeycomb structures. Didier Wolff and the design team found that the main challenge of the Carboneum livery was to sustain the longevity of the finished look, in particular the carbon and honeycomb texture. Three full weeks, over 2,500 hours of work and a team of 30 people were necessary to complete the exterior design of the Global 6000, that had just left the workshop following a major revision.

The team had to come up with a new reliable calculation technique to obtain a perfect result on very complex zones such as the engine nacelles with regular and irregular curves. In order to fully fit these curves, the honeycomb texture covering each engine was divided into 24 separate stencils with the main challenge being the infinitely variable sizes of each. Throughout the application work, everything was measured down to the millimetre despite working with vinyl sheets that were not very flexible and extremely delicate when laying the work. Given the complexity of the design, several attempts were needed before finding the best way to assemble each element.

Beneath the aircraft a seemingly sombre metallic grey has been used. The aircraft has a very specific colour scheme, as it uses the Ferrari anthracite grey as stipulated by the owner. This basic colour was used as a reference for all paint derivatives, especially during the production of the carbon effect. The canvas representing the carbon fibres required a perfect understanding of the low-pressure airbrush work. Walter Maurer and Martin Dippel then focused all their talent on completing this complicated texture and three-dimensional finish.

To complete the work and bring it together as a whole, the team of painters applied an ultra-glossy finish. The superposition of a metallic tint and a very glossy finish gives this aircraft an exceptional effect. It changes the dominant colour based on the positioning of the sun and creates tones in a subtle way, in particular on the engine nacelles. In addition to the ‘chameleon’ effect, Didier Wolff chose to draw the eye to several very specific areas. To showcase this livery combining various shades of grey, he opted for a yellow pantone in order to highlight the various technical markings on the twinjet: the yellow security markings are perfectly integrated with all the aircraft tones.