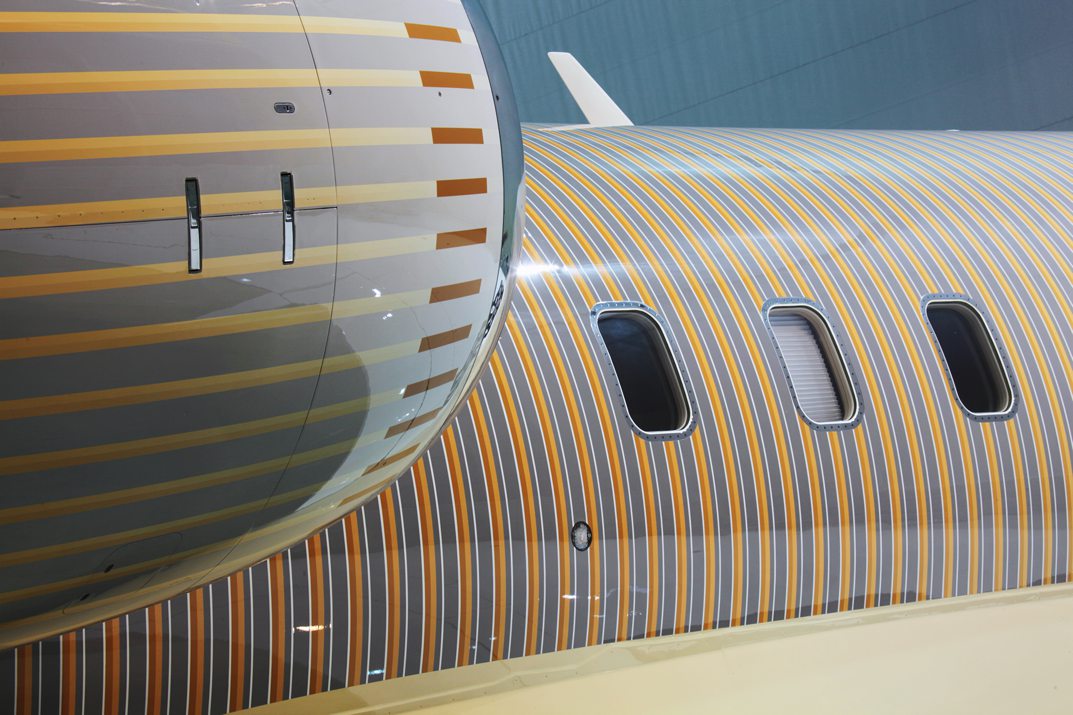 Happy Design Studio France have been shortlisted for the International Yacht and Aviation Awards 2014.

Entering the Private Aviation Exterior Design category with their orginal aircraft livery design and paint supervision on a Bombardier Global 5000.

The whole aircraft exterior design is born from a ceramic tile detail which is part of the aircraft interior’s luxurious tableware set.

The design’s application to the exterior of the aircraft makes it one of the most complex designs painted on an aircraft exterior today.

Consisting of five colours, each with a fading effect from the front door to the last window, the aicraft reveals it’s full design details only when approaching boarding.

Series of vertical stripes sets ranging in width coat the entire body appearing from window to window and from white to full colour. The engines have the same striping and fading effect but horizontally and the lines around the irregular barrel form of the nacelles have been shaped with absolute precision.

A key aspect of the project was to find the right paint workshop to take up the technical challenge as there has never been a livery of this kind before in such a short time frame. Grounded time had to be no more than six weeks when despite an orginal estimate of ten weeks minimum.

Another challenge was to build a techical team that could exceed their own previous limitations and to be capable of technical innovation to deal with the daily technical milestones thoroughout the paint process.

The design works well because the balance between the five colours and the perfect fading effect. The contrast between the vertical lines on the drift and the powerful horizontal ones on the engines accentuates the design further.

The International Yacht and Aviation Awards are important as aviation can appear to be a rather mild, conservative and shy industry. When a designer has the freedom to create what even paint experts say is impossible, recognition of such creativity  is essential to help change the perception for owners and constructors, to show design has a full field of exsistence including the aircraft exterior appearance.

You can view a video of the project in process below.