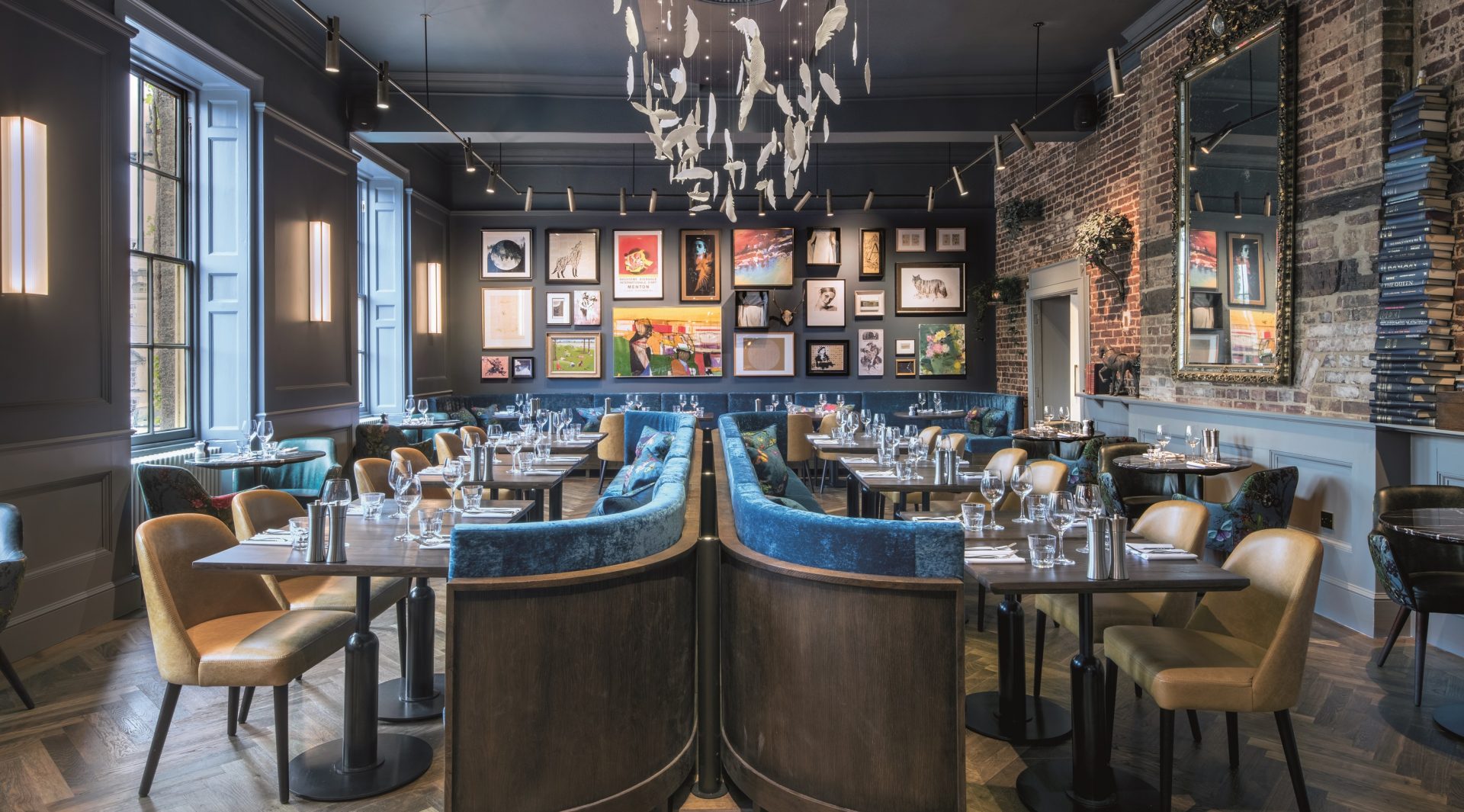 design et al are delighted to announce that Harrison Design has been shortlisted for Restaurant Within a Hotel – Europe Award in The International Hotel & Property Awards 2019.

Harrison re-designed the Angel Hotel’s ground floor in its entirety, including the Lounge, the Bar and Restaurant area as a hybrid space, along with the hotel’s brand identity, to create a unique, holistic, inviting all-day environment.

The hotel has an iconic location within the market town and is famed for its association with writer Charles Dickens, who stayed there three times in the 19th century, referencing the hotel, then a ‘Coaching House’, in his book ‘The Pickwick Papers’. Taking inspiration from this heritage, and that of is impressive Georgian ivy-clad architecture, supported by further local research, we created a concept underpinned by a brand essence of ‘fables and tales’ — this being the foundation for creative decisions made throughout the process of all brand, graphic touch-points and interior design, so much so to include the audio experience and menu creation.

It was imperative to modernise the feel and use of the ground-floor space, in particular by integrating the Bar and Restaurant so that it can work as one hybrid area yet retain some of its ‘old charm’. The redesign of the space allows for a new chapter, without disregarding the story behind a place with such heritage. Small nods throughout the design keep this history at the forefront of one’s mind. To the side of the bar, the Snug is guarded by a white bear head, as a subtle nod to the White Bear Inn, which had been one of three inns that used to be on the grounds.

Discovering the rich heritage of this grand Georgian Coaching House and developing a strong personality and reason to believe, which led to a creative execution that enhanced the overall guest experience by combining history, discovery, adventure and design. There are hand-painted murals, by Elegant Clutter, across the walls in both the Lounge and Bar areas, which are inspired by a local historic tale ‘Edmund and the Wolf’. The hand-written lettering across the Bar’s feature mirror is a quote from Dicken’s ‘The Pickwick Papers’, of which the Angel Hotel is referenced; albeit then as a ‘Coaching House’. It’s this layer of before-mentioned details that add to and strengthen the original concept.