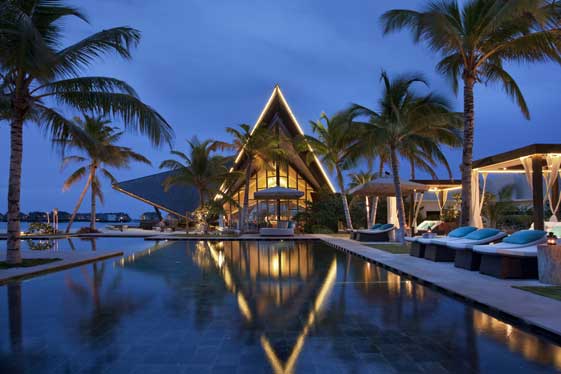 Some of the largest guest villas in the Maldives, each with wraparound private plunge pools, are incorporated in the stable of 36 Beach Villas and eight Beach Suites, 39 Lagoon Villas and seven Lagoon Suites, and the epitome of island resort grandeur, a stunning Presidential Suite.

Traditional Maldivian thatched huts with honey-coloured timber flooring and high ceilings inspired the architectural design, and anchoring the western end of the island, an instantly recognisable pan-Asian all-day dining venue, Samsara. Samsara is one of the most unique structures ever seen in a Maldivian resort…and is easily recognizable to boats travelling between the atolls for its strikingly modern triangular structure with sun-bleached cedar tile roof.

Adopting The Maldives’ heritage as the Indian Ocean archipelago’s crossroads for early sea-farers formed the concept and inspiration for this luxury resort design. As a meeting point of travellers, The Maldives has always been a melting pot of cultures, a mix HBA wanted to convey through different architectural styles and detailing throughout the resort.

Subtle Maldivian architectural expressions of traditional craftsmanship are featured through separate “villages” of villas and suites, immediately identifiable in different colour themes of cobalt, white wash, light sky blue and dark navy blue. The colours are the same as used by Maldivian locals to paint and decorate their own houses, as well as stone walls found everywhere in local villages. Continuing the theme, local ‘bolifushi’ cowry shell is adopted in artwork and finishes as a tribute to the island’s origins.

The resort’s spa design was based on traditional cultural belief of the universe as a ring. According to ancient Maldivian belief, the universe is contained within eight ‘cosmic’ gardens. This was restricted to four due to space limitations of the spa, but the concept remains – with guests moving through various gardens as they progress through the spa. Double treatment rooms are found within a circular garden that also includes the relaxation pavilion. Beyond this garden are over-water treatment pavilions and an exclusive VIP spa pavilion.

Even the arrival jetty is a new concept, designed as a multi-use space, doubling as a lounge and chill-out area with dramatic, unimpeded views over the Indian Ocean. Astounding beautiful, Jumeirah Vittaveli emerges as a magical island escape that also delights with three captivating restaurants.

Apart from Samsara, in an architectural landmark of its own, Mu – Beach Bar and Grill is a timeless experience in a stunning location with mesmerising views for enjoying the exquisite simplicity of succulent barbeques. Serving fresh-caught seafood in a contemporary Mediterranean style, Fenesse is the “ultimate voyage of mouthwatering discovery”, set in a serene over-water location.

Main challenges to the project were inevitably logistics, with all materials and equipment imported, requiring careful planning and scheduling to achieve project milestones.