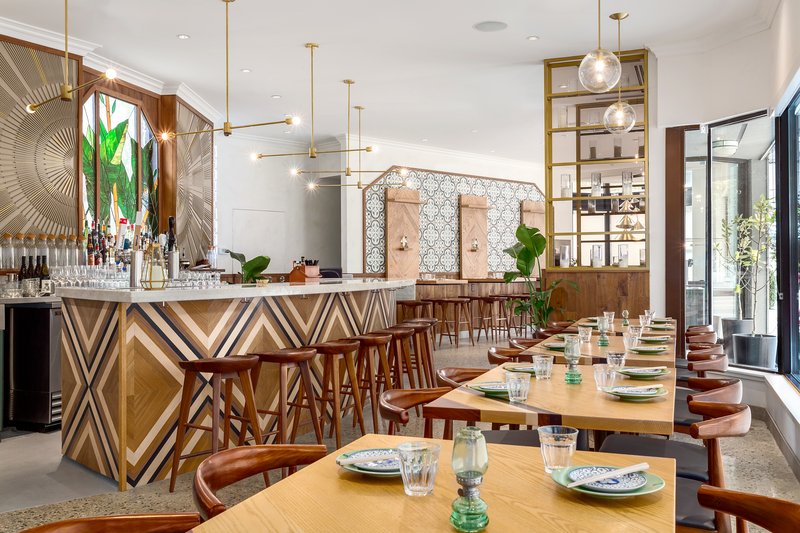 design et al are delighted to announce that House Of Bohn have been shortlisted for Restaurant Award in The International Hotel and Property Awards 2017.

Anh + Chi came into existence when a family business was passed down to the next generation. The family’s son and daughter saw an opportunity in Vancouver’s dining culture to create an atmosphere for people to enjoy a traditional Vietnamese meal with a cocktail or beer, a concept not present in Vancouver at the time. It was important for the family to give the old restaurant a much needed modern renovation but still stay true to the roots of where they came from. Elements from Vietnam’s landscape and culture were used to create motifs unique to Anh + Chi.

Layers of stained wood were used on the bar front and table tops as a geometric interpretation of the terraced hillsides. On the back bar, chopsticks were intricately installed to mimic the pattern of the fans used in traditional dancing. The centre of the bar is graced with a rare opportunity to take advantage of natural light with an existing window that was replaced with a custom tropical stained glass window. Colonial inspired Parisian tiles sourced directly from Vietnam were installed to create a division of space and colourful texture. The restaurant’s corner booth was adorned with a custom chandelier of brass shades modelled after the hats worn by farmers working on the rice paddies. The unisex bathroom, with communal sink and brass fixtures, reinforced the Vietnamese influence with the fan pattern from the bar inlayed in the bathroom stalls wooden doors and a custom palm wallpaper wrapping the space.

The key aspect of the design is the layering of patterns, material and colour. Each element was selected to complement and strengthen the others. The metallic brass finish of the fixtures looks richer against the green of the palms and the warm geometric patterns in the wood frame and ground the looser organic pattern of the tiles on the wall. House Of Bohn’s favourite part of the design is the bathroom. To maximise the limited space available it was decided to make it unisex. This allowed the designers the opportunity to design unique aspects such as the central trough sink and enclosed toilet stalls with beautifully inlaid solid wood doors. The signature House of Bohn feel of glamour was added to the space with the custom palm leaf wallpaper and brass fixtures, creating a welcoming environment for all to access.