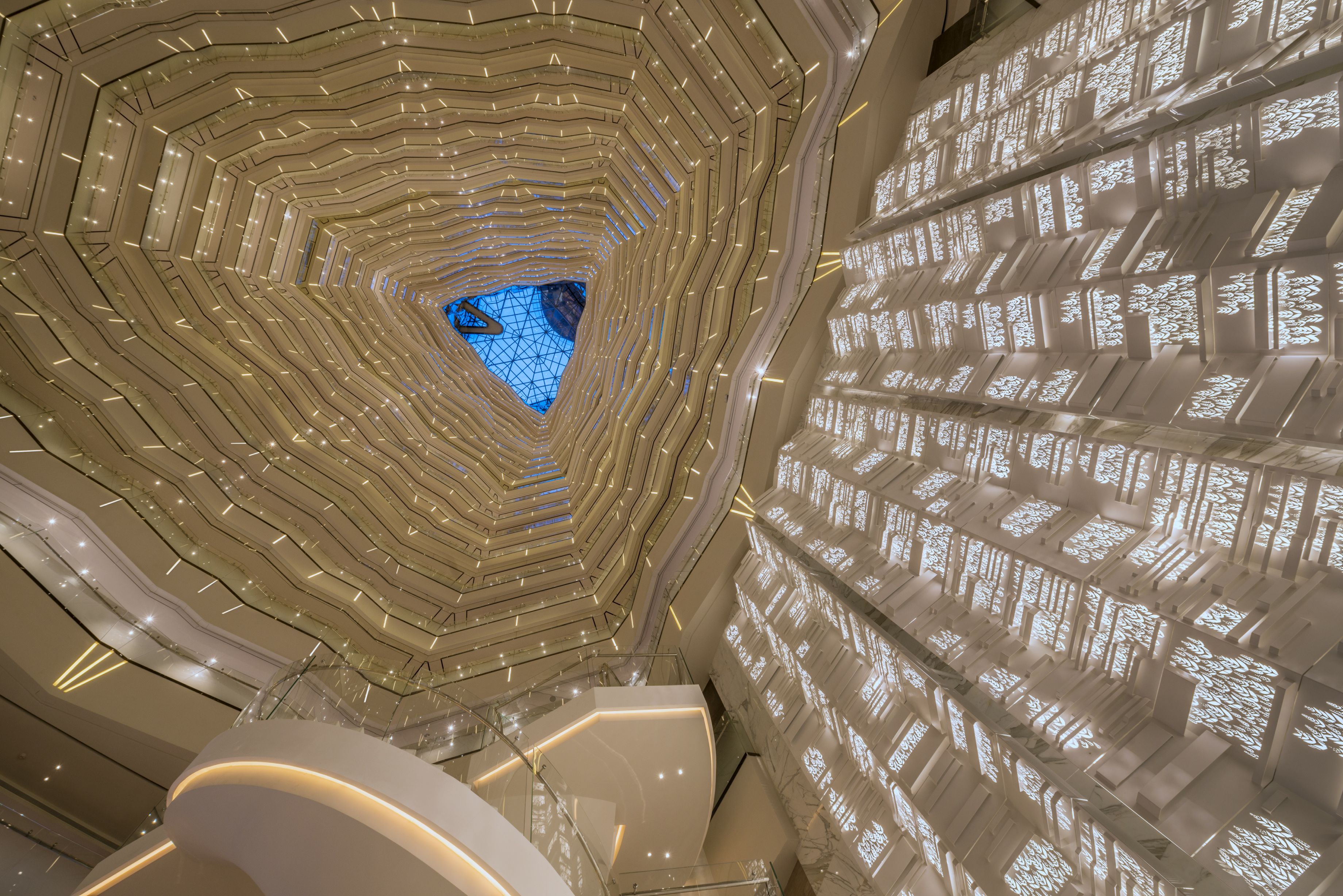 The Four Seasons Hotel Guangzhou, which occupies the top third of the 103 storey IFC Building in one of South China’s largest cities, has made the shortlist for the International Design & Architecture Awards 2013.

The Four Seasons Guangzhou is perhaps the most extraordinary hotel in China and is certainly the most daring of the Four Seasons properties. Gracefully bridging the gap between the brand’s ultra-luxury standards and the avant-garde architecture of the Guangzhou International Finance Centre, HBA’s design creates a space that is sumptuous and soaring in scope. Thoughtfully contemporary, the sophisticated minimalist interior creates an incomparable, ethereal experience, as if one were among the clouds, floating within a delicate and brilliantly lit diamond.

The choice of material for every inch of the project was considered through a luxury lens. Beginning in the lift lobby, the elevator doors open past a deep dark wood frame to a lift car bathed in a warm dark red glow. A unique red stone, Onyx Fantastico changes in colour and tone when viewed from different angles. Symbolizing the fiery breath of a dragon it gives the elevator cab a sense of drama and expectation. It also creates a stunning contrast to the purist material palette of the Level 1 Arrival and Level 70 Reception Lobbies.

The Cloud Bar on Level 99 is home to an eight metre long rare piece of gemstone, cantilevered and floating against a seamless backdrop. The gemstone is rare natural Agate, characteristically bluish purple and very hard to come by. The bar sits in front of a seamless window, giving arriving guests the impression there is a giant gemstone floating in the clouds. Adding to this effect are the crystal clear Lucite bar chairs which do not distract, yet enhance the pristine and luxuriously minimalist environment.

China is a market that loves to embellish and really feel what they’re paying for, and on occasion, you have to balance the serene and harmonious with the overt, dramatic and dynamic. There are small touches like that, from the guestrooms to the restaurants and elevators. We picked our moments of when to be lavish and when to be exotic. I think that’s one of the secrets of designing in China – you can be too cool for China-taste, which can sometimes fall flat, or you can be too extravagant, when everything shouts at you. It’s critical to strike a balance between excitement and refinement. For this particular project, materials and finishes were deliberately chosen to create a subtle interplay of colour and pattern to mimic the movement and moods of the sky. Polished stone, natural gemstone, gunmetal steel, and smoked glass were employed in large quantities to tie the hotel to the natural world 70 floors below. These were aesthetic choices though, rather than for practicality.

The Four Seasons Guangzhou occupies the top third of the landmark International Finance Center. The IFC skyscraper is a significant contribution to architecture generally, and is instantly recognizable an icon of high style in South China’s largest city. At 103 storeys, it is among the tallest buildings in China. The Four Seasons Guangzhou would be remarkable for its altitude alone, but HBA’s thoughtful and artistic integration of the building’s ultra avant-garde interior spaces will make it a legendary destination.

HBA/Hirsch Bedner Associates unveils the world’s most anticipated hotels, resorts, and spas.  Leading the hospitality interior design industry since 1965, HBA remains keenly attuned to the pulse of changing industry trends governed by today’s sophisticated traveler. The company’s international presence, depth of experience, and detailed industry knowledge enables them to identify interior design trends at their source, make definitive predictions about new directions and innovations, and influence design standards at a global level.  HBA’s ultimate objective is to add value, raise standards and enhance the brand of a project’s owner and operator.

HBA creates the signature look of traditional luxury brands, independent contemporary boutiques, urban resort spas, world-class residences, restaurants, casinos, and cruise ships. From continent to continent, each HBA interior is the result of a unique and sensitive response to location, architecture, and client vision. With over 1,000 designers around the globe in 16 offices and a recent expansion in Asia, HBA is a true global company with more than 75% of its employees now outside the United States. HBA’s international presence, combined with its extensive knowledge of the interior design industry, has facilitated the ability to rewrite the language of design with each new project.