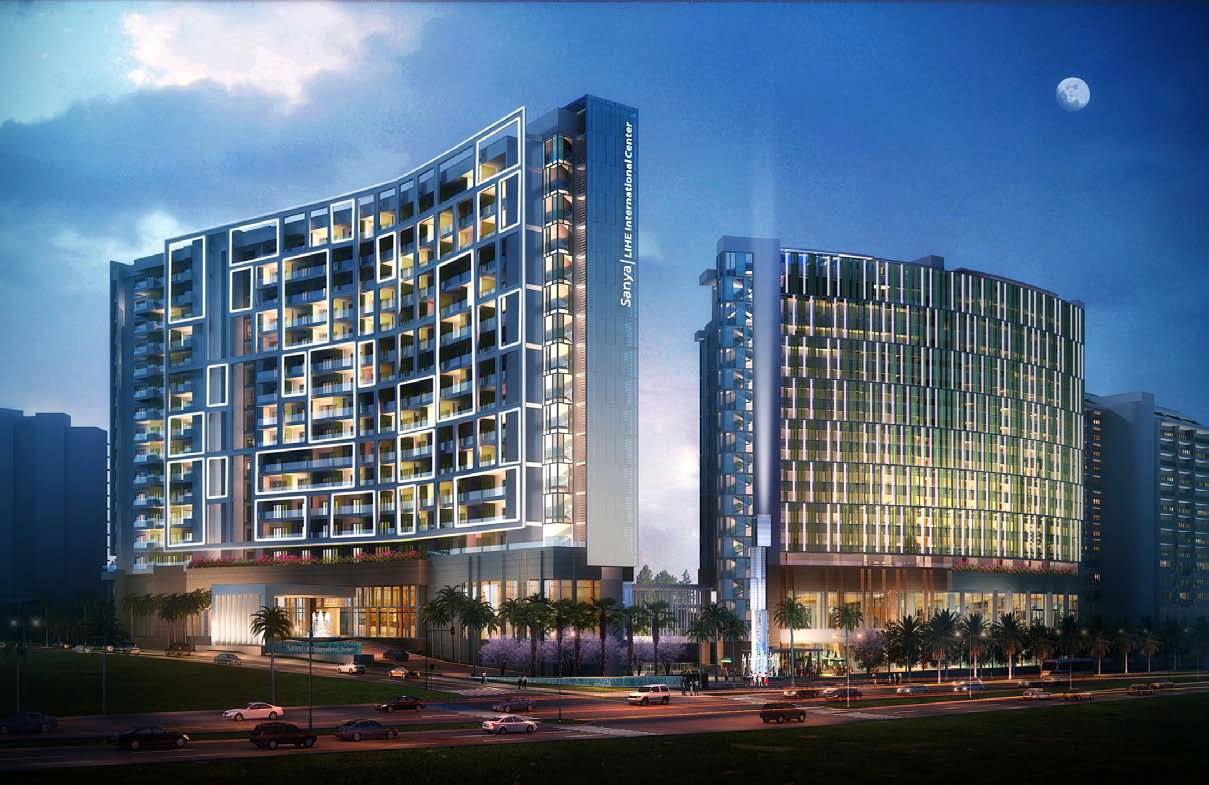 The Lihe International Center is a mixed-use project located on Sanya Bay in the city of Sanya on Hainan Island in the P. R. China. This week, we are delighted to announce that the project, submitted by M CO Design has made the final shortlist for the Asia-Pacific Design & Architecture Awards 2013.

“The client tasked the design team with integrating two existing hospitality properties with a resort hotel, condominiums, shopping street, and conference center. An existing 200 key hotel will be demolished to make way for the new construction. for the design team. Close proximity to the international airport set the building height limit to 60 meters (197 feet) and large urban set-backs tions meant using creative design strategies to maximize the potential of the site. Additionally, the site is located one block inland from the ocean and therefore has a further challenge to capture premium views to the water and beaches along Sanya Bay.

The earliest site planning exercises explored massing strategies to ideally locate the “front doors” for the various user groups coming to the site: hotel guests, shoppers, long-term residents and conference attendees while maximizing views to the ocean and sunlight exposure for the resort pool area. Ultimately a 5 meter (16.4 feet) site grade difference provided the greatest value for the design team. The site slope allowed the new construction to meet the existing street grade along the north side of the site giving the new retail plaza and tenant spaces visibility to the street but to have all the retail areas counted as “below grade” by the city planning authority. This allowed all of the above grade floor area to be dedicated to the hotel and residential program for the greatest investment return to the client. In the selected scheme the retail street is a day-lit passage anchored by two towers above (one for hotel and one for condo), and tucked under the pool area adjacent to a 2-level below grade parking structure and service docks.

Finding a unique design aesthetic to set the project apart was challenging due to the large influx of new resort properties in the Sanya area. Hotel architects and large Western operators have built numerous projects that explore many different avenues of design style in an effort to create a distinct identity in the competitive market place. However, a large portion of the new projects in Sanya reference Southeast Asian vernacular building forms and materials to relate to the local conditions and tastes. The Lihe International Center attempts to challenge this predominant direction by looking back to the era of grand resorts by Moris Lapidus while adding a 21st Century spin to his look. The latest LED façade lighting technologies are combined along with sustainable planning ideas for shade and natural ventilation to minimize energy requirements during t he life-cycle of the project.

The site is situated less than 1000 meters from the landing taxiway of the international airport and could be considered a liability for the project. The design team took this as an opportunity to employ an open air architectural screen on the north facing side of the condominium tower as a beacon of light to passengers when landing. The screen also doubles to shield the single-loaded corridors of the condominium units for privacy and to cover up package HVAC units commonly left exposed in other locally built projects. The east facing façade of the hotel employs another LED lit screen designed to allow unobstructed views to the ocean from guestrooms while making a playful façade pattern to announce the hotel to the street.”