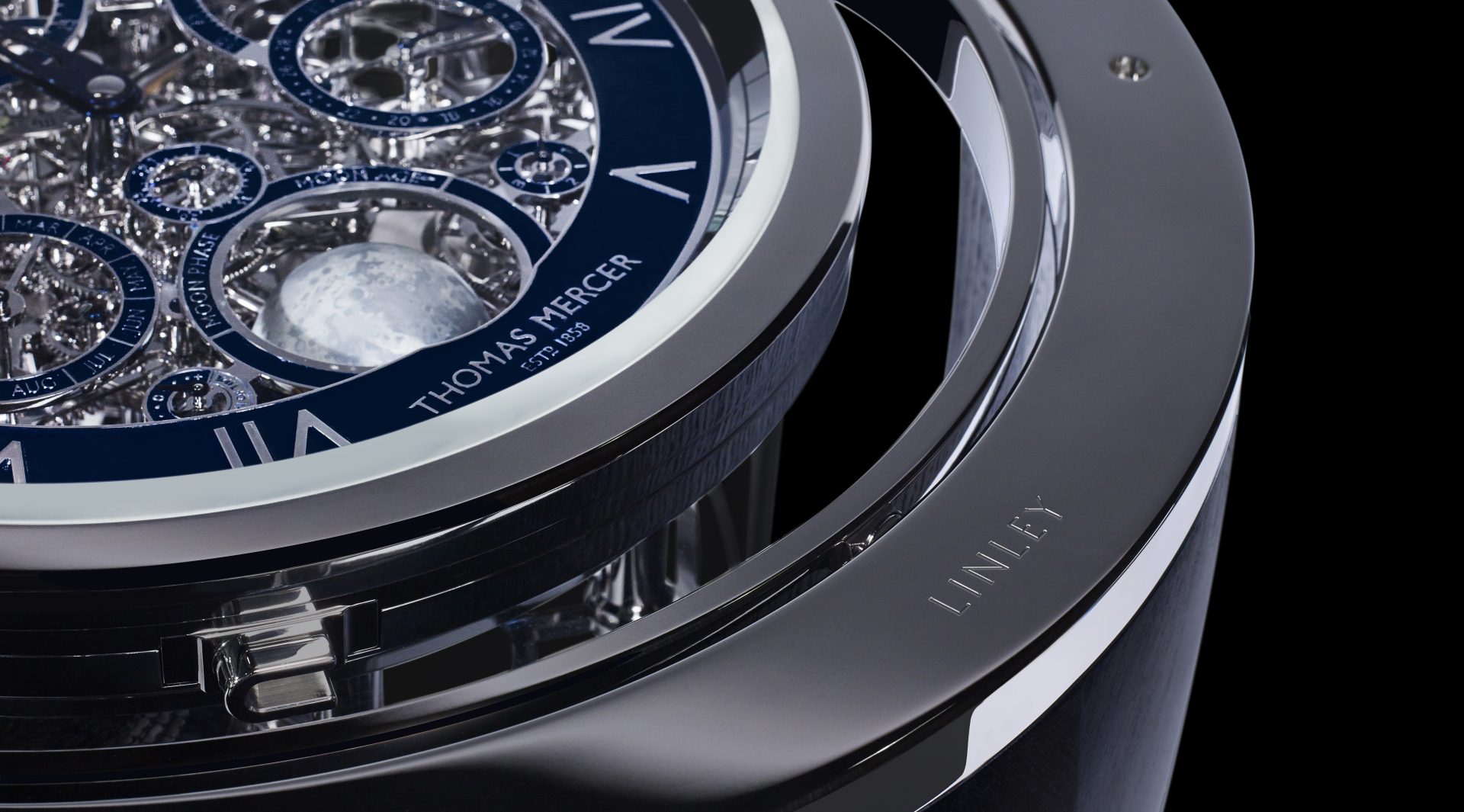 design et al are delighted to announce that LINLEY have been shortlisted for the Bespoke Cabinetry Award in The International Yacht & Aviation Awards 2019.

The Aquilo Chronometer emerged from the fusion between leading British furniture maker LINLEY and famed British Chronometer specialist Thomas Mercer, to produce an extraordinary horological furniture piece which highlights their respective expertise and celebrates marine Chronometry and cabinet-making. Its movement features several astronomical complications while the casing is made from marine grade stainless steel, atop a base crafted out of blue eucalyptus and solid oxidised oak. The design features extra-white crystal glasses and a mirrored base to all inner workings can be observed.

David Linley started the discussion with Thomas Mercer back in November 2017, brainstorming about ideas to create a unique horological piece of cabinetry. The ambition behind the project was to merge the expertise of two leading British makers and create a never-seen-before horological furniture that would honour the complex new Thomas Mercer astronomical movement (Calibre TM 3002) and showcase LINLEY cabinetry expertise, taking inspiration from all areas of maritime influence. Indeed, the inspiration of the main piece was the bow of a yacht while many other details would need to evoke the sea and the world of sailing, with an objective to appeal to customers who value pedigree, handcrafted quality and peerless design. Another aspect of the brief was to design an extraordinary horological furniture piece in a way that all aspects of the instrument’s inner workings could be observed.

Sharing the same pursuit of design excellence and superior craftsmanship, our joint efforts culminated in a unique piece of British heritage that is a testament to our respective disciplines.

Aquilo is a statement, a celebration of craft, engineering and heritage encompassed in a contemporary horological furniture piece. The design is so special also because the mechanism is housed in a case made from marine-grade stainless steel and offering an all-round view of the inner workings which can be admired in their entirety, from every angle, free from distortion thanks to a set of extra-white crystals. But the story telling around the design is also very special and engaging as it encompasses the influences of the ocean. Streamline shapes evoke a feeling of wave movement and take influence from marine mammals, blue eucalyptus chosen for its figure, again echo the ripples of waves and subtle elements of the design consider the beautiful features of the chronometer. A mirror beneath the complex movement celebrates the piece from a different angle, while there are further subtle nods to nautical influences such as the winch inspired turnkey and the suggestion of les rose des vents on the base.