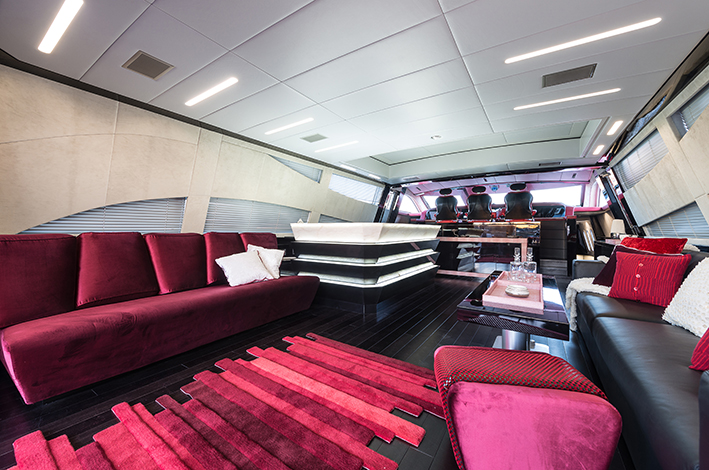 Appointed directly by the young Owner of the yacht and thanks to his trust, Luxury Projects (LP) Team had a real chance to express all their creativity and utilize new ideas during the entire design process. Design and use of innovative materials were the focus points that allowed LP to achieve the Owner’s requests.

The Aesthetic feel and the emotional path. Rather than just creating spaces for works of art to be displayed, the designers have made art integral to the yacht itself, so there is a strong emotional path throughout the boat. The new concept of the headboards is the best expression of material and artistic pieces covering the whole wall behind the beds in all the Guest cabins.

Strong, sensuous and emotive colours. The strong and non-conventional colours of the exterior dominate the rest of the design; all intended to create a novel design and sleek look for the yacht. As per the Owner’s request, the interior is largely black and red, and has been given a tactile finish, from the use of the wood to the differing textures, leathers and fabrics, creating a relaxed and joyful atmosphere. One of the major tasks for the Designers was to successfully marry these two strong colours with the rest of the yacht; they achieved this by using strong shapes e.g. the salon and lounge sofas, the bar counter and finishing touches such as bathroom taps and custom-made door handles.

Innovative materials. Again thanks to the Owner’s great collaboration and trust, the Designers could experiment with materials never before used on board:

– a revised concept of handmade ceramic art or “terracotta,” allowing the bathroom sinks to be made in one piece and the Owner’s shower/Turkish bath to have merging tiles of mosaic with sculptural material panels;

– backlit alabaster stone with a special finish used for the still material and monolithic sculptural shape of the salon bar top;

– avoiding the standard shining leathers generally used on side window panels of an open-yacht’s main salon, the Designers carried out research into different finishes. The final result was that custom-made matte and laser-cut leather was used for all the vertical panels in the Salon and guest cabins; the Owner’s cabin also has Designer’s patented eel leather floor tiles.

Lighting project. The yacht benefits from a fully-custom lighting system. Using state-of the art LEDs (no more grids of ceiling spots), different white colour temperatures were carefully elected along with custom-designed lamps and reading lights for each cabin. The lighting impact on the outdoor, as per pictures, has also been a focus point of the design process.

High-tech, top standard, custom entertainment system. This was highly demanding and meant the Designer’s had to find clever compromises with the available spaces and the furniture design concepts.

During the construction of M/Y KOJI one of the major efforts of the design studio was merging the very specific Owner requests with already planned or built structures. Designers almost “re-invented” the existing furniture functions and spaces from the original standard layout. The VIP forward cabin is a great example of this, where the spaces were increased thanks to a different positioning of the side bulkheads and under-window furniture. Rather than just creating spaces for works of art to be displayed, the designers have made art integral to the yacht itself, so there is a strong emotional path throughout the boat.