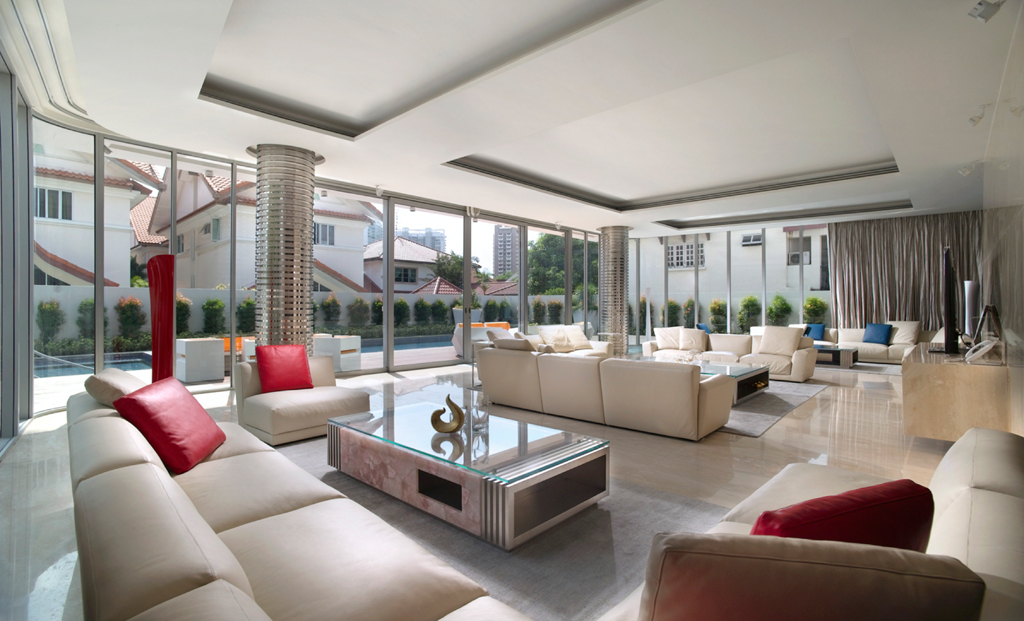 Further shortlist success for Mercurio Design Lab with their project Villa Lambda, in Singapore in the ID&A Awards 2014.

The name “Lambda”, refers to the 11th letter of the Greek alphabet, which has come to represent almost anything to do with worlds within worlds – wavelengths, new planets from outer space and complex sub-atomic systems. But it was the chance encounter with a scale model of the Lamborghini ‘Gallardo’ with its implied juxtaposition of triangles, which led to Lambda to its graphic form.

This suggest a key idea of two inverted triangles, slightly offset from one another – a design solution that immediately offered a powerful interpretation of an idea and potential for a great development ahead.

With further refinement, the triangle geometries were smoothed out. One end got heavily chamfered, becoming a skewed quadrangle and allowing a large cantilevered roof eave to protect the large windows of the bedroom. The other triangle was stretched at its opposite end and slightly smoothed to form a rounder bullnose morphing from the house walls into a long carporch.

Lambda should have resembled a sport car but as its conceptualization took shape, it started to project the idea of a space vehicle. Therefore, when the car porch was designed with two canopies at each side to extend the protection of the parked cars, their resemblance to winged stabilizers was one right touch to the finalization of the design.

One of the greatest challenges that the design team faced at the early stage was to comply with the regulation for habitable attic spaces in a bungalow. which in Singapore has a rather restrictive code that imposes a pitch roof with very distinctive geometric conditions, yet at the same time find an aesthetic solution that had to visually adhere to the dynamically unique and futuristic style that was set for Lambda since its inception.