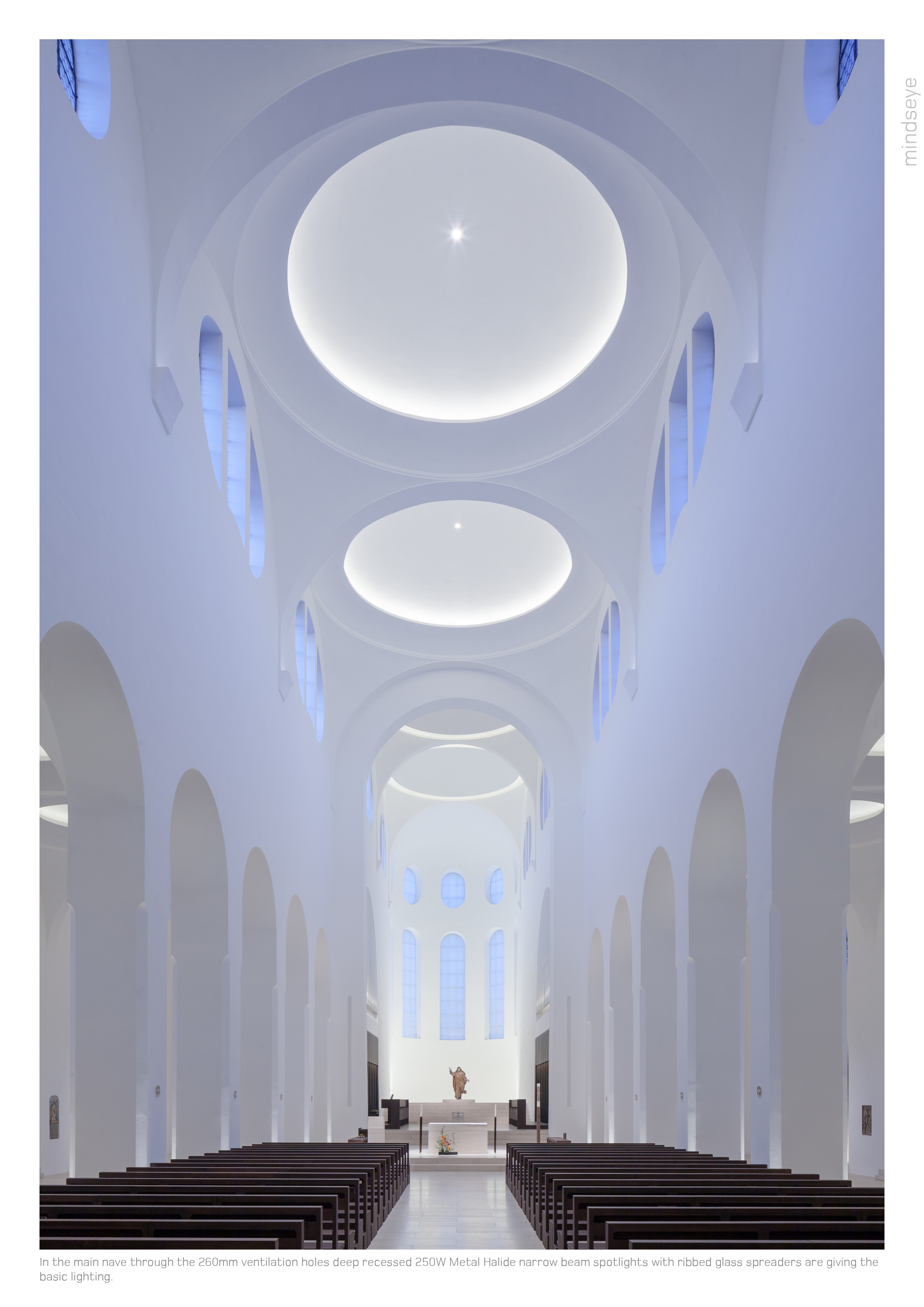 Mindseye Lighting Are Shortlisted In The International Product Design Awards 2014

In 2009 John Pawson Architects were awarded the contract to undertake a vast refurbishment project of the Church of St Moritz and their main aim was to bring clarity and light to the church. Mindseye were appointed as the lighting design team and Associate; Admir Jukanovic, led the team on a five year journey which involved the huge task of designing a scheme that produced light for the numerous areas of the church, but ensuring to keep the products minimal and non-visible in most places. The result within this imposing structure demonstrates the rhythm of the space by accentuating the various architectural elements.

Respecting the Pawson ethos of minimal design, Mindseye set out to ensure the luminaires were obscured from view and that the light spoke for itself. Using a dynamic white scheme, we allowed almost all luminaires in the church to change from warm white to neutral white. Warm white light prevails during the evening, while neutral white is used during the day, matching the exterior light.

The Altar area itself is illuminated by 10 projector luminaries placed behind the dome lip which are not visible to the churchgoer. To avoid visibility within the dome, the opening has been kept as small as possible. To avoid unwanted spill of light in the arches of the main nave, the wall washer foil of the LED fittings has been turned by 90 degrees, creating a defined longitudinal beam instead illuminating only the arches. The main focal point needed to be on the statue of Jesus in the Apse. This was achieved by creating a space of light behind the statue and focussing additional spots to create the illusion of the statue being actually bigger than it is.

The Dynalite control system contains over 30 programmed schemes. They can choose from a very minimal illumination on Good Friday, only accentuating the roman elements of the church, to Easter Sunday where all luminaries are on and tuned to create a pompous light, emphasising the baroque dome elements and main architectural features of the Church.

The Baptism Chapel is lit by one single round domed cove light. It mirrors in shape the round baptismal font. The infinite Turell light effect creates a unique ambiance for this special ritual taking place in this impressive space. The Sacramental Chapel is lit by two horizontally coved light slots. They lead to the edge lit wall where light frames the crucified Jesus figure. Spotlights positioned opposite create a soft front light onto the cross drawing your eye in. The Langemantel Chapel where candles are lit, is kept dark. Most of the light enters through the side nave, while light is only used where needed – by the bench behind and onto the silver Maria figure creating a comfortable ambiance encouraging to visitors to stay and contemplate the space and their thoughts.