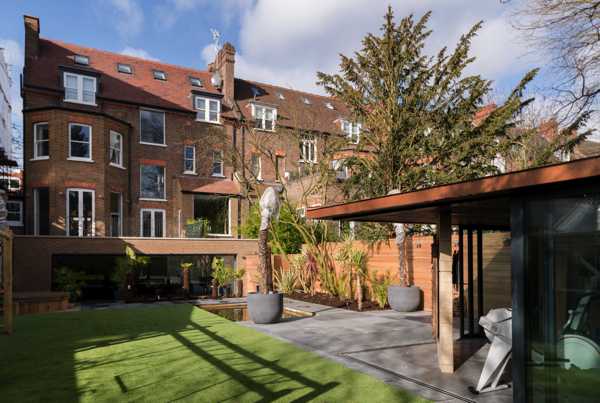 MW Architects: Shortlisted for the Glasshouse over £50,000 Award

MW Architects have recently been shortlisted for the ID&A Awards 2014, with their London Garden Yoga Studio entering the Glasshouse over £50,000 category.

‘A garden yoga studio constructed from board marked in-situ concrete with a cantilever copper roof and opening glazed corner.’

The garden of this north London house was the final phase of a large refurbishment project. The client wanted a serene retreat for yoga set in a ‘tropical’ garden. The building needed to have a sense of solidity and permanence and be open to and part of the garden, yet provide some degree of privacy too. It had to be better than off the shelf garden rooms which were rejected on the grounds of flimsiness and restricted openings.

The site is a conservation area and therefore had to be built without requiring planning permission (permitted development).

The area was also surrounded by mature tress with shallow roots, making traditional strip foundations impossible and had to resist the spread of fire across the garden boundaries which is was adjacent to on two sides.

A favorite aspect for the team is the board marked concrete which give the structure the rigidity to float on a raft foundation and not affect the tree roots.

Some reasons the design works so well due to the engineering, detailing and use of material being so elegant and balanced that it sits comfortably in its surroundings with a sense of purpose and permanence.

The boards used to form the walls were the same as the surround fence, so when the formwork was struck the same boards were cleaned up and then charred to clad the ceiling, which had to be flexible because it was engineered down to just 100mm thick and cantilevered over the fully sliding glass sides and corner. The slowly oxidising copper roof (also flexible) slowly is blending into the surroundings.