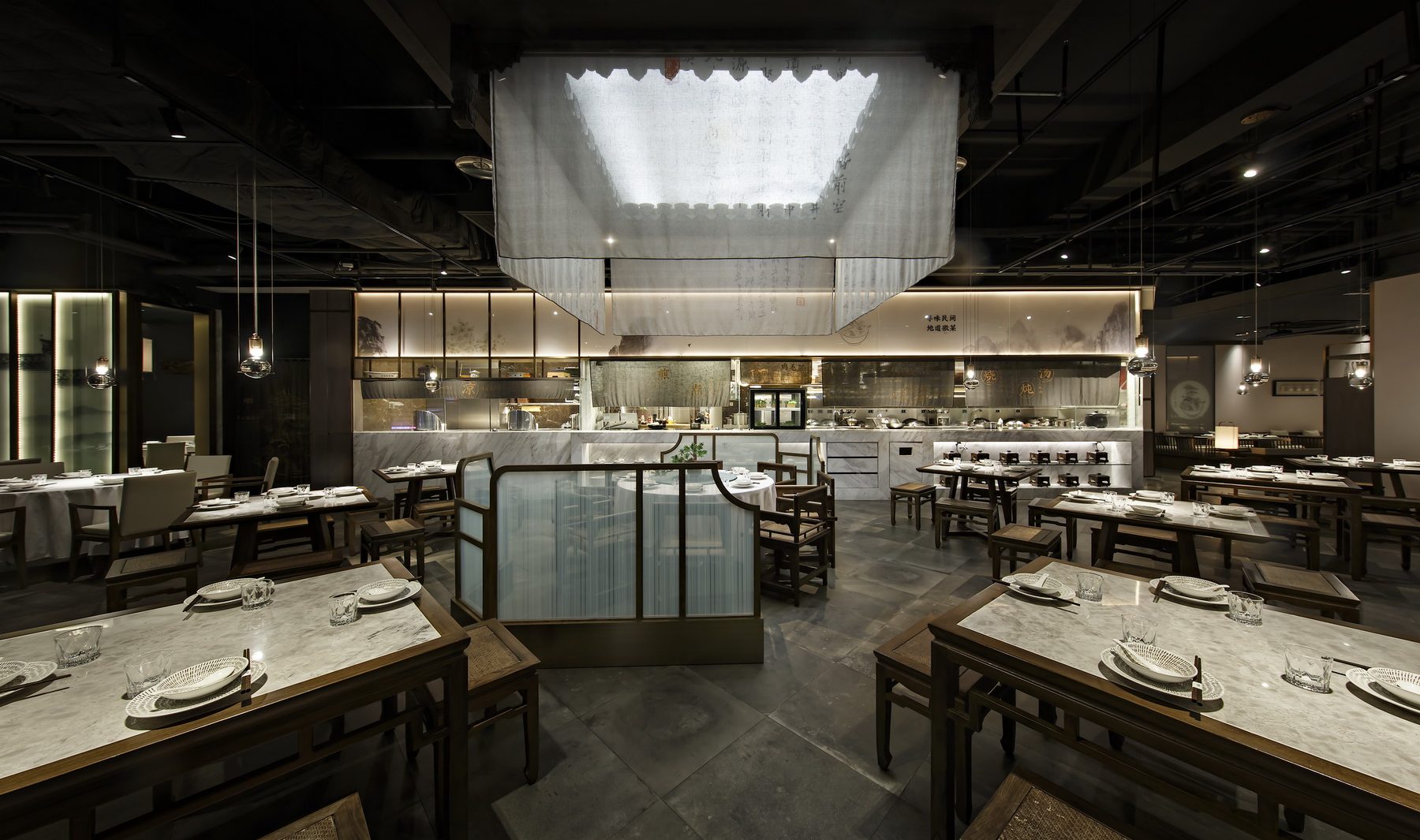 RWD aimed to make the restaurant a place where people can enjoy Huizhou cuisine and experience Huizhou culture. The space borrowed the layout of traditional Hui-style building, with all functional areas being arranged in an orderly way. At the entrance, the Huangshan pine (pine endemic to the mountains of eastern China) casts shadows on the wall and tiles under the light, seeming to greet all the dinners.

The central area imitated the design of the traditional Hui-style patio. The image of top light and sky was integrated into the ceiling, which is surrounded by corbie-steps made of Chinese-style tiles. Oblique glass mediates the massiveness of the space, and reflects the Chinese characters under the light, making them appear to be floating in the space. The open kitchen directly faces the central area. In the kitchen, the designer fully utilized stainless steel to decorate the space and disassembled Chinese characters in the menu into strokes and spread them on the art glass. Solid Arabescato Corchia marbles, combined with the soft lights, add to the rhythm of the area. The food preparation area was designed with clean streamlines, where the cooking section, dessert section and cold dish section are independent yet backup each other.

In order to make full use of the space and improve table turnover rate, tables were arrayed on the surrounding of the central area. Besides, a long yet narrow area in the original space were retained and utilized, where tables for two and four people were placed. The glossy film on the ceiling lightens the space, with corbie-steps on its two sides, which are similar to those in the central area. In the private dining area, wired glass was used as screen, which ensures privacy without partitioning the space. Rose Chairs of Song Dynasty, a type of arm chairs which were preferred by ancient Chinese literati, were put around the round tables, adding to the elegance of the space. White-gourd-shaped beams, a typical element in Hui-style architecture, face the screens across a distance, endowing the space with an atmosphere of sedateness. In this area, people would feel like that they were back in Huizhou.

With the blend of traditional and modern features, the project reproduces the spectacular scene of reception banquets held at the home of Huizhou merchants.