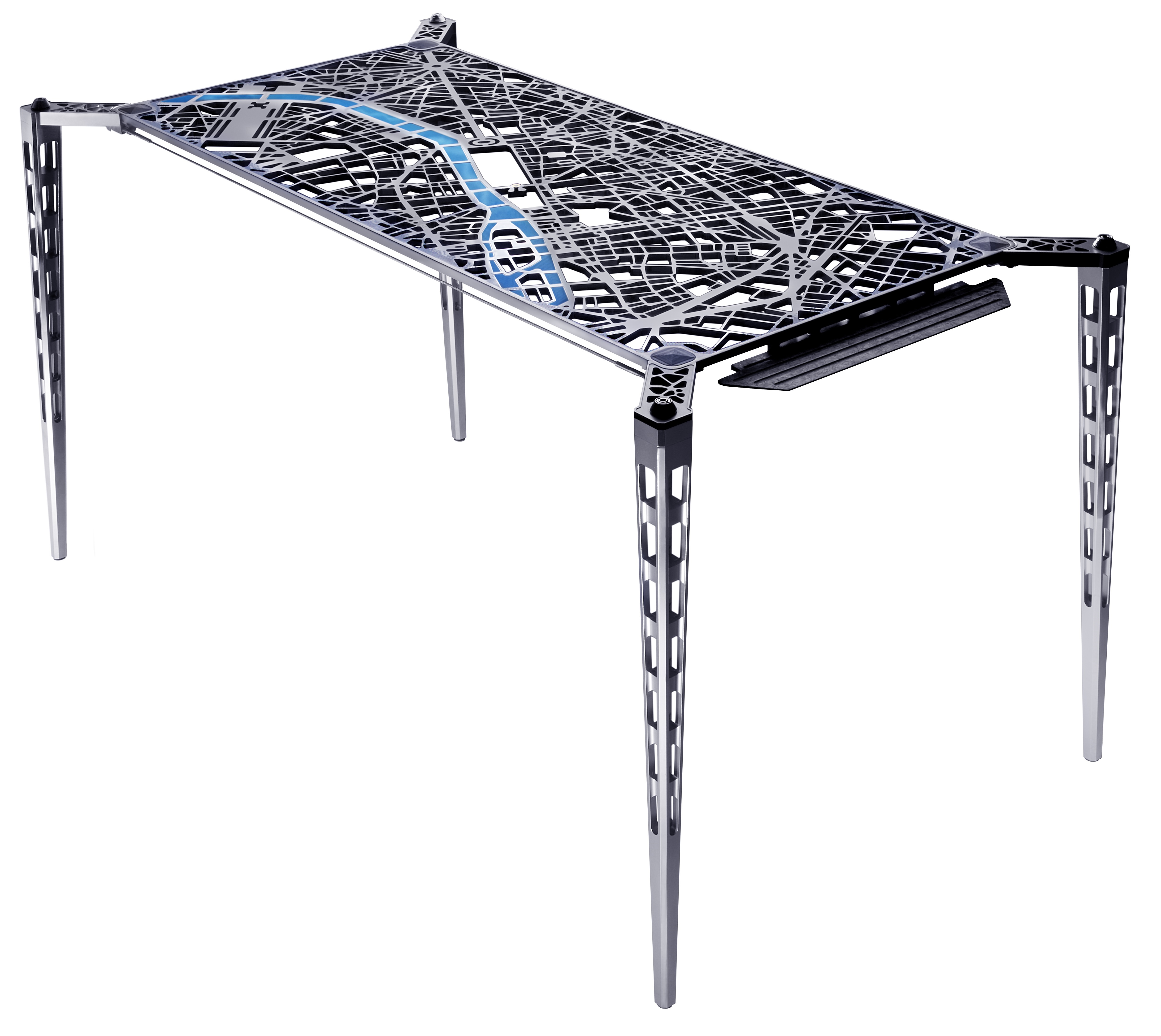 Luxe et al are delighted to announce that Sébastien Barrau Manufacture have been shortlisted for the Table Award in The International Yacht & Aviation Awards 2018.

Sébastien Barrau has designed a unique and outstanding desk made from titanium, depicting the high-tech heritage of fine art, telling the Paris meridian story. As the designer understood the challenge of creating a design with titanium and its uniquely demanding composition, titanium allowed him to create this challenging design and interesting style. Although previously dedicated to space expeditions, titanium is now being used in new designs, new technology and with accompanying new materials for furniture and interior design.

The adventure began in June 1667, when the Observatory in Paris was created, particularly its meridian room. This sublime representation of Paris put forward this imaginary line, with the aid of a remarkable and fine laser setting decor. Blending blue and golden tints, it is an ancient tale told with today and tomorrow materials and technologies. Two centuries later, in 1884, the Paris meridian was abandoned in lieu of the international meridian of Greenwich. A law adopting the latter, declared officially on March 9th, 1911, the definitive closure of its existence. Since then, the 24-time zones have been set to Greenwich Mean Time. Adding another degree of precision, the coordinated Universal Time (UTC) appeared in 1972. The different time zones are thus defined for the whole globe (UTC -11.00 to UTC +13.00), as the designer decided to highlight their international references by means of thin laser inscriptions on the edge of the piece; Paris, London, New York, Dubai as well as Praia, Rikitea and Apia.

Focusing in avant-garde technology, this table also has valuable inserts. A 1 carat diamond focusses on the location of the Louvre Pyramid, highlighting the passage of the meridian in the Napoleon courtyard. This precious stone rests on a frame obtained by titanium additive manufacturing and an 18k gold crimp. With Paris in Titanium – GMT History, Sébastien Barrau Manufacture succeeded in entering the world of matchless and outstanding furniture. The studio took over the codes of exclusivity and then surpassed them thanks to the subtle work of laser texturing. By adding patterns and colours, titanium is neither raw nor cold, it becomes velvet to the touch.

The Seine offers superb coloured variations with the 24 guilloche silver plates. The ‘nails of Paris’, fully machined in the mass, gives life to the object particularly with the sunlight. The composition is revealed thanks to the slightly bluish precious resin, and shows an astonishing finesse & detail of the river. The titanium plateau, finishing stage in “Côtes de Genève”, is remarkably complex and reminds us that the designer has had to use audacity to its limit. Another achievement remains with the four table legs. They strongly express the complexity of the design, as well as the exceptional characteristics of the material. Thanks to this 36kg masterpiece, it breaks the codes and dynamizes an environment.