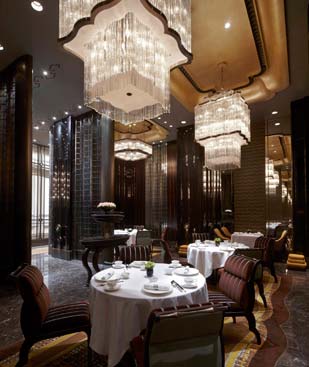 Shang-xi, Four Seasons Pudong, Shanghai – by AB Concept – has reached the shortlist for the Restaurant within a Hotel Award in the International Hotel and Property Awards 2013.

Since launching in 2001, AB Concept has earned a reputation as the design firm of choice for the world’s leading hoteliers, luxury developers, and premium restaurant operators. Led by co-founders Ed Ng and Terence Ngan, AB Concept is widely regarded as one of the most dynamic, forward-thinking, and internationally acclaimed design studios in Asia.

We’re delighted to share some images of the stunning restaurant here:

AB Concept’s client list includes the Four Seasons, Mandarin Oriental, Shangri-La Hotels & Resorts, W Hotels, Marriott International, Swire Properties and Henderson Land while the company’s diverse projects span across Asia, the Middle East and the mainland. Based in Hong Kong with an office in Bangkok, AB Concept has over 60 team members comprising almost a dozen nationalities. With so many creative influences, AB Concept brings a cross-cultural overview to each project enhanced with an appreciation for both Eastern and Western design traditions.

ARCHITECTURAL PRECISION With an instinctive architectural style that is expressive in its form and practical in its function, our designs reveal a keen appreciation for structure, form and proportion.

SENSUAL INTERIORS Designs that inspire, engage and intuitively evoke a sense of place and timeless elegance. The scale, purpose and nature of our designs may vary, but these three fundamentals remain constant.