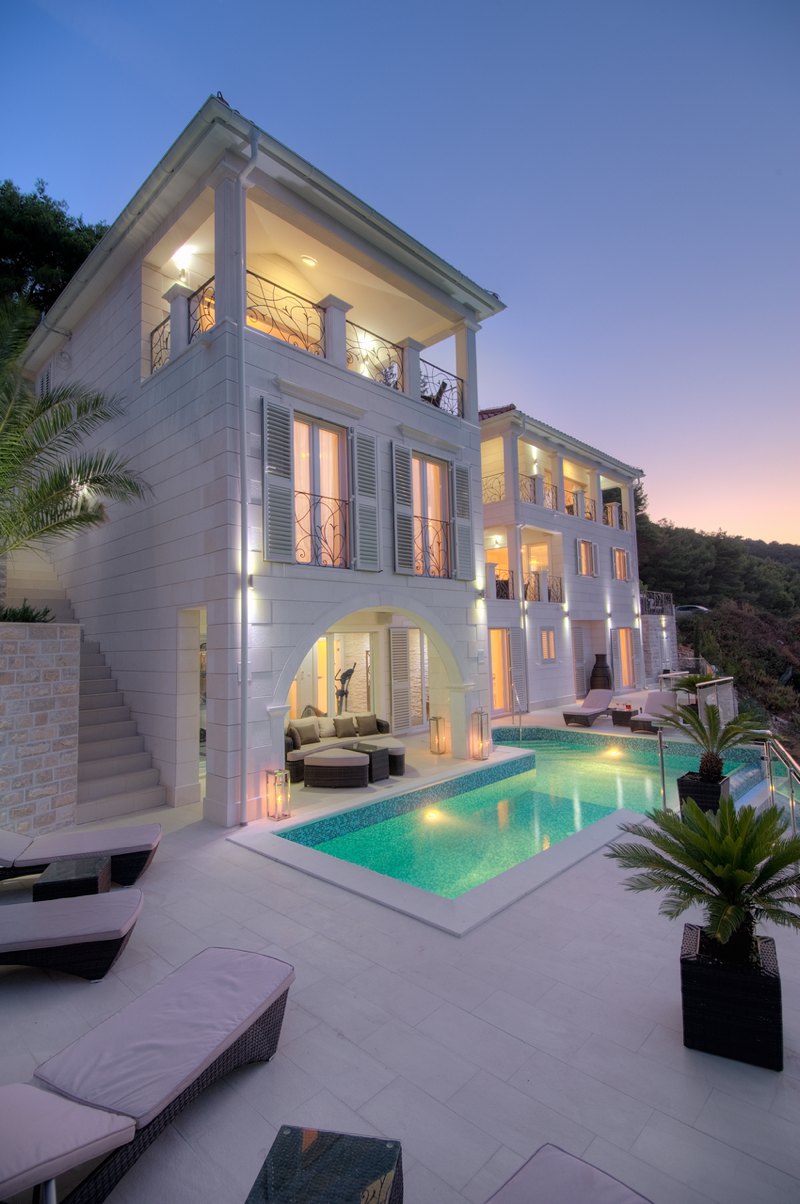 design et al are delighted to announce this beautiful 400m2 Stone built Villa by Pin & Pin in Croatia has been shortlisted in the  £1- £2.5 Million(Property Value) Award. The Villa is situated only 5 meters away from the Adriatic, and has been carefully designed to boast traditional features yet to remain contemporary and timeless.

Pin & Pin have acquired, designed, built and sold premium properties in the most sought after locations along the Dalmatian Riviera since 2004.

Villa Lypa was built on a green-field site which was a rarity on the market and came with the responsibility to create a property which sat well in its surroundings and to maximise the potential of its location. The position is unrivalled, right on the water’s edge with stunning views over the turquoise sea to the harbour of Sumartin and the Biokov mountains beyond.

The aim of the project was to design a villa which boasted traditional features, using local stone masons from the island, yet remaining contemporary with timeless interiors.

Permission was obtained to build a 3 story 400 m2 property with a pool. The overall design and materials used were intended to compliment the local architecture. The space has been utilised to its maximum potential within the local regulations to gain a spacious four bedroom home with unbeatable sea views from every room.

The project exceeded the expectations of Pin & Pin and went smoothly throughout due to rigorous planning. Lypa attracts the most discerning clientele and after being granted permission, mooring was added which allows super yachts to moor right in front of the house. To have a villa in such close proximity to the sea with these facilities, is a rarity within Europe.

Within 5 metres of Lypa you can be swimming in the crystal clear Adriatic admiring the view of the Sumartin with the Biokov mountain range as a backdrop.

Villa Lypa was designed to boast traditional features to be in keeping with the local architecture, yet remain modern to appeal to a wider clientele. We didn’t want to create a project that was minimal and had short term lifespan which dated within a few years. In decades to come Lypa will sit proud. The contrast between solid stone pillars, clean exterior stone and traditional cast iron railings has proven to be a winning design with endless amounts of compliments.

The villa revolves around the central living area. The middle floor consists of the kitchen and living room at either end which completely open up to a large balcony in the centre of the house. The guest then has the option of indoor or outdoor living, remaining private from the prying eyes of neighbours. At this point you can see any area of the house, from bedroom balconies, the pool or the mooring on the sea front creating a great social aspect of the house.

From entering the house on the 3rd level, panoramic views of the sea can be seen at any point of the house (even the corridors) giving a reminder of Lypa’s close proximity to the sea at every opportunity.