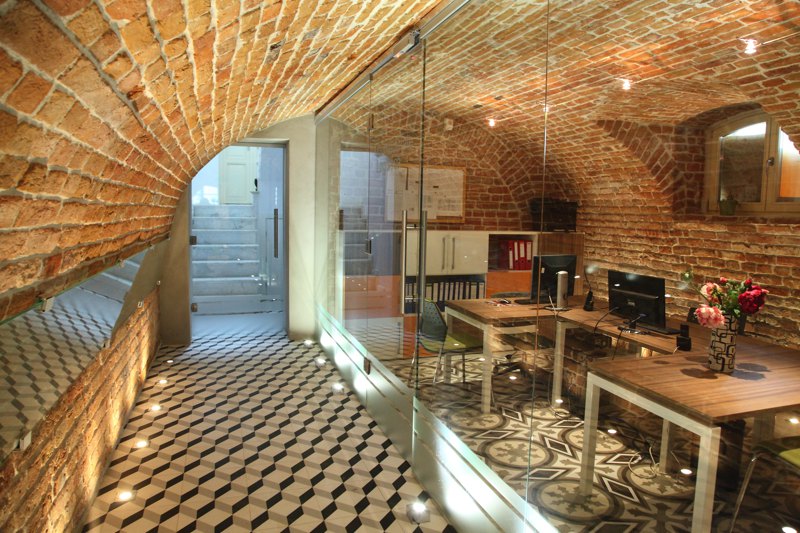 design et al are delighted to announce the successful shortlist for Studio Insign for the Office Award in the ID&A Awards 2014.

These offices are situated in the basement of an historical building within the centre of Bucharest. The building dates from 1881 and was consolidated and renovated by Studio Insign. The story behind this building is quite impressive. It once belonged to a well known banker until 1940 and it then became a property of the Communist Party. From 1950 until 1989 the property was used as a center for extracurricular activities for children and then in 1990, the house once again came back into the ownership of the Bankers family. The house was then sold and was unused until 2012 when the owners of Studio Insign purchased the mansion.

The building was named Noblesse Palace and it is important from an architectural perspective, being one of the first houses built in an eclectic style. The Noblesse Palace is divided into interesting areas: the basement is for the offices, the ground floor was transformed into an Art and Event centre and the first floor it is the most exquisite furniture and interior design show-room for Buchares-Galeriile Noblesse.

In just one year all the works were complete. The designers managed to make the room ceilings higher by digging down. They preserved the original stones from 1881 by cleaning them from the wall coverings. It was decided that the best style for these offices was a vintage look with industrial accents. The floors are covered with ceramics featuring a vintage pattern and the walls remain with the original brick stones and in some offices these have been painted to introduce colour.