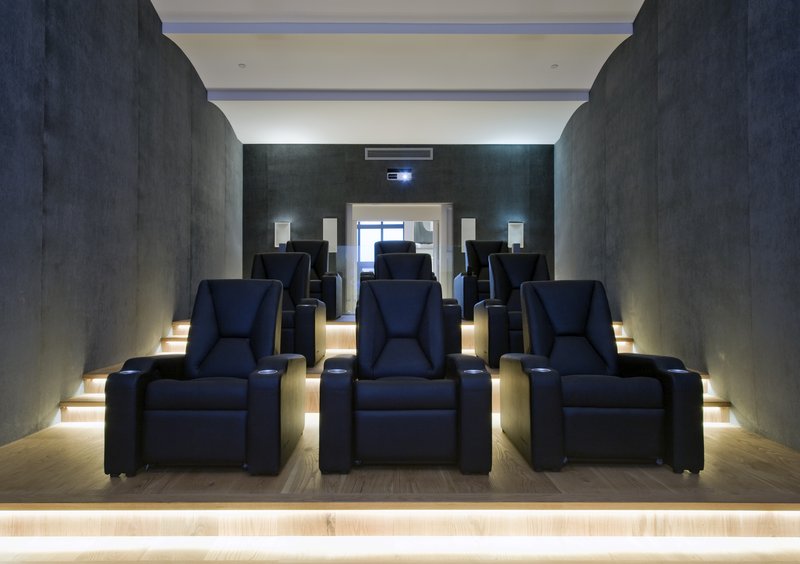 design et al have great pleasure in announcing the successful shortlist for Marshall Hurley for the Home Cinema Award in The International Design & Architecture Awards 2015.

The brief was to create a cinema that mirrored the feel and detail of a UK supercar factory. The curves in the ceiling are picking up on the aerodynamics found to be used for car air flow. The detailing of the hand stitched walls was matching the stitch found in top supercar interiors and the roof light with remote control blind was designed on a sun roof found on a supercar.

The roof light ceiling at the top of the cinema to the ground was an impressive 5 metres high. The grey suede interior on the walls complimented the wide plank oak floors and the detail and state of the art high end equipment tied in with Marshall Hurleys – Built to endure ethos. Aesthetically the cinema had to look stunning but it had to also be state of the art with the technology used. The custom made acoustically transparent screen was large for a home cinema, it measured in at 5 metres wide by 3 metres high. The HD/3D Epson projector was top of the range and there was a full 7.2 surround sound cinema system with 2 in wall subs, 9 seat shakers and an additional 4 extra ambience speakers hidden behind the fabric walls. The seats are remote reclining and the cinema system was fully integrated via the home control network as was the rest of the 5 storey house offering integrated satellite tv, digital media players, dvd’s along with lighting & heating control. The automation system used was Control4.

The cinema also doubled up nicely as a media room for business meetings and had Microsoft windows and other popular operating systems used for business. The door to the cinema has two symetrical sets of stairs to help traffic flow, all steps have LED dimmable controls which were on remote control and the cinema was air conditioned with cooling and heating operated by a wall and remote control system.