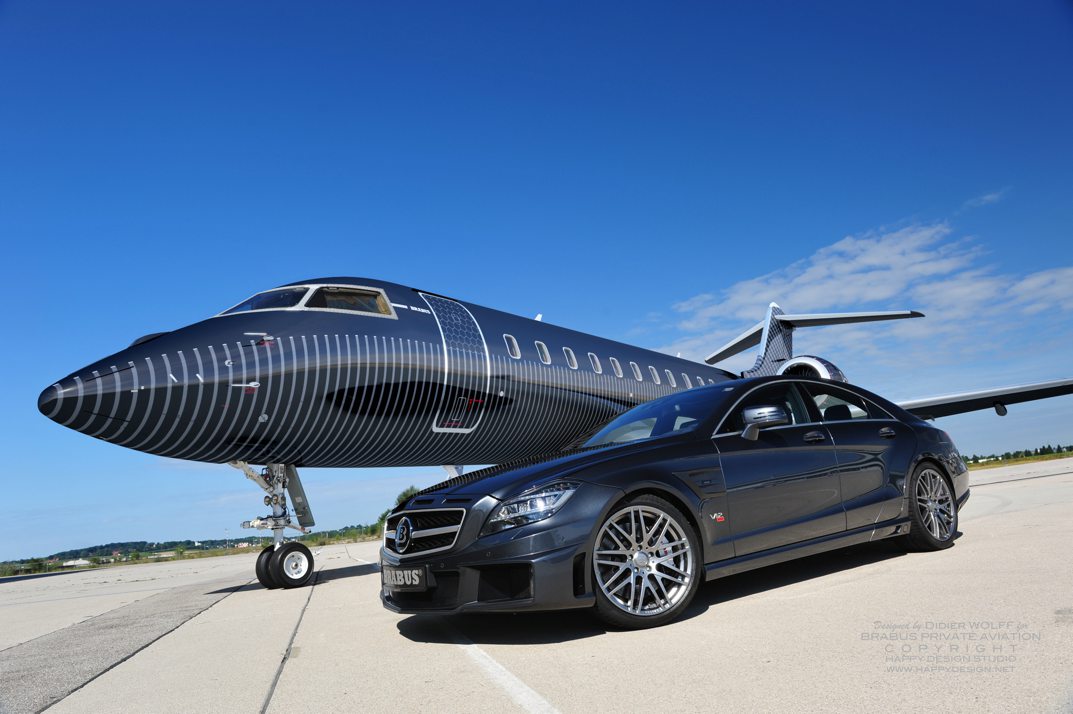 The project was conceived following a meeting between BRABUS, the German luxury car manufacturer and Happy Design Studio France. The initial idea was that from the customer’s point of view business aviation must, just like a top of the range car manufacturer, be able to respond to their expectations of high personalization and continuous innovation in manufacturing and design.

Currently the automative industry are reacting much quicker to their customers desires than the business aviation industry. For the exterior aspect of the aircraft the livery had to subtly reflect the BRABUS spirit to provide a fine and complete high standard tuning to the client’s next dream: a BRABUS Private Jet…

There is a fresh and modern feel to the BRABUS interiors which use innovative top of the range materials such as carbon fibre and yachting wood – this was a key inspiration while designing the outside of the aircraft.

The Livery Design is offered in 4 different colours, Black, Grey, Beige and Blue and will be produced as a limited edition.

When the partnership with Brabus was first presented to Didier Wolff, he was in Dubai and went straight to the Brabus Dubai showroom where he got a feel for the Brabus Spirit, but it was not enough and he then visited Bottrop, the Brabus Factory location where he realized the real dimension of this project. “In Bottrop I saw the cars, the workshops, the teams, the service, the professional spirit, all of the elements I am always looking for in a project. Many people work well and like what they are achieving but not always with such passion, dedication, technology, so many things needed for an audacious project to be born”

“To exactly define what is doable and what is not and to then put a progressive and but realizable design on an aircraft is a difficult process that involves long periods of research. We had to conceive a design that was adaptable to a large range of aircraft in the top of the range sector whilst also bearing in mind the constraints of each of the models”.

The original design project on a Bombardier XRS looks black but it only actually 99% black. This livery has been created in order to be a pleasure to look at from every angle. This is something Didier says is always essential to his designs. Also, the natural light wraps the aircraft entirely and has been taken into consideration particularly for the under part of the aircraft which often remains in the shadow. As a result, the grey lines covering the lower part of the fuselage look darker, amplifying the volume effect on this already beautiful sculptural like shape.

The front of the aircraft is where the eyes start to discover the whole livery, which is why it has been designed to guide the eye from left to right through small details and to draw the eyes to the Brabus logo.

Other textures have been used in the design such as honeycomb stitches, a very natural but also very technical element, on the door and onto the engines. This honeycomb texture is also used by Brabus in their car design.

Even if the overall livery looks black, you can find some very important coloured elements,

like the red line on the engines. Red is an essential colour for Brabus car design, even though it may be used sparingly. It was important to add this colour detail which represents Brabus signature for the aircraft. In the same spirit, all security markings onto the aircraft are also painted red, as were many details along the fuselage giving the livery this high-tech feeling.

Brabus uses Carbon in its cars, “This material is noble, technical, solid, light. Which is why I have chosen to place it on the drift, an element strongly grabbing the air and giving to the aircraft its powerful look”.

“Most of the aircraft you see in airports are white, rather boring and lack personality. They are great at flying, landing, suitable enough inside, but the exterior aspect of the aircraft is most often very badly dealt with, The first thing you see of an aircraft is its envelope, its exterior look which should invite you to come on board”.

“In addition their large scale is a fantastic tool to work with, making the sky a unique gallery for these aircraft. When such a freedom is given to a designer to create on such a fantastic object as an aircraft, awards show recognition and lead the way to overcome the usual technical limits. IY&A awards recognition is the perfect platform to showcase pushed boundaries”.