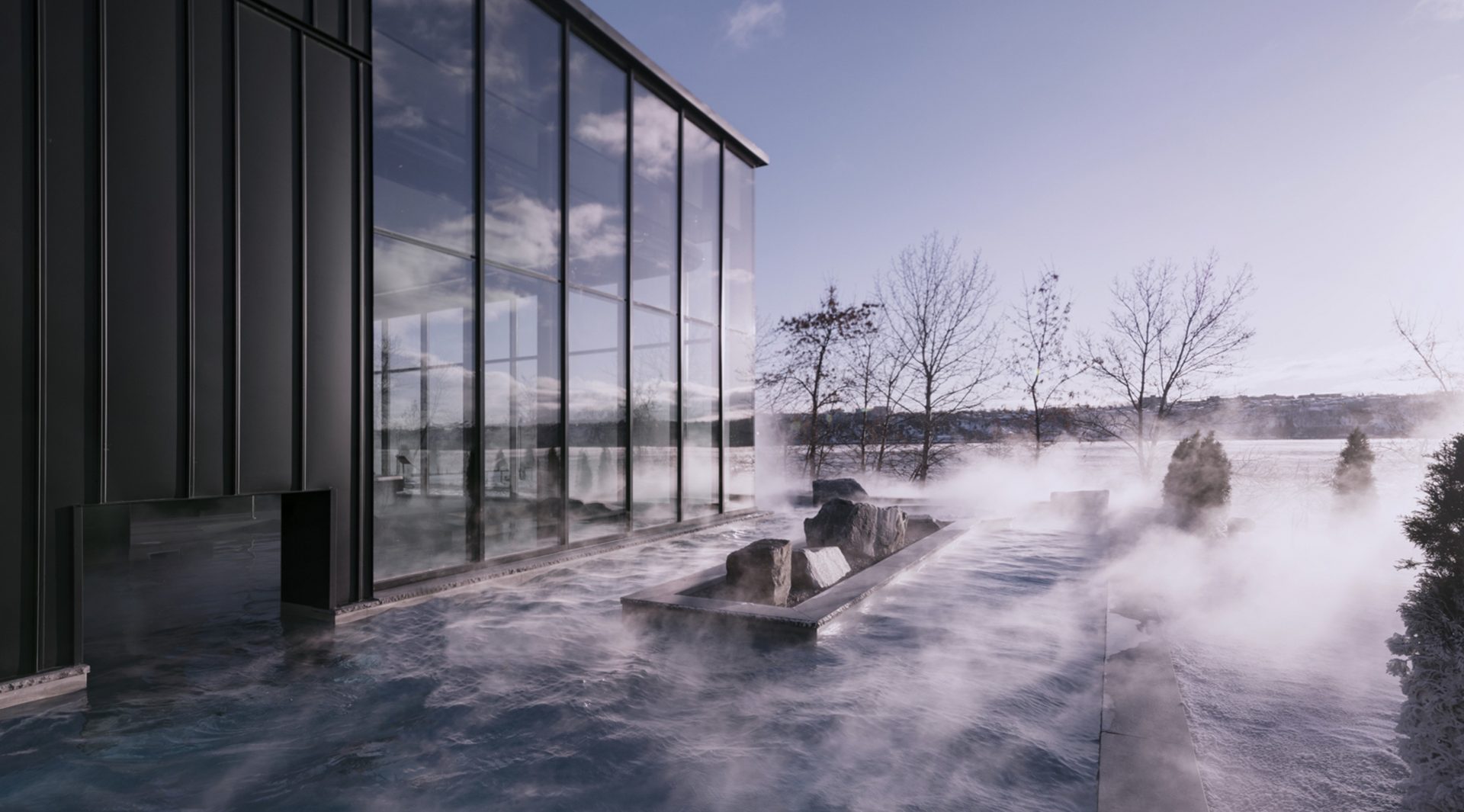 design et al are delighted to announce that Strøm Nordic Spa have been shortlisted for Spa/Spa Hotel Award in The International Hotel & Property Awards 2019.

A spa laid on the banks of the St. Lawrence River evokes, by it geometry, the harbour history of the site.

The concept of project is based on the intention of underlining the nautical history of the site. The layout of the spa installations is cast on the footprint of the old harbour wharves that once formed the banks at the shore front, creating volumes, alternating between full and empty. This architectural ensemble is then deposited on a site decomposed into layers descending towards the river, recalling the historical layers that form the memory of the place.

The interiors were designed using the same sources of inspiration as the ones used for the architecture, mixed with the existing aesthetics of Strøm Spa brand. The colour palette is in harmony with the environment and the materials used are natural, and in certain instances, inspired by the River and the maritime history of the site. Per example, the reception desk made of Corten steel, reminiscent of cargo ships, which was chosen for its warm rusty aspect that creates an interesting contrast with the modern and clean lines of the space. The use of pebble stone on the floor of the entrance is also linked to the sea, bringing to mind their traditional use as boat ballast.

By truly moulding itself to the site and using the best features of the location to provide the installations services in an exceptional environment. The architectural design positioned the elaborated spa programme so it imprints on the historical profile of the site, i.e. the quais and harbour profile. The volumes were then opened and articulated in position on the different stratas that mark the character of the site, on a slow descent towards the River and thus favouring the views. The interior design, kept simple and clean, favours neutral colours and natural materials. It is equally used to underline the same design principles and intents than the ones used in the architecture. The result are spaces that are designed to serve the true purpose of the spa, favouring the well being of the end-users.

The contemporary architectural style of the volume is in continuity with the adjacent building made of glass and wood. The green roofs complete the project to match those of the neighbouring interpretation centre and blend with the site. Viewed from Cap Blanc, the project is seen to be in continuity with the Bassin Brown developments. In addition, the lot being located at the end of the Promenade portuaire du Foulon and the Promenade Samuel-De Champlain, the contemporary architectural style has been favoured in order to harmonise with all neighbouring components..