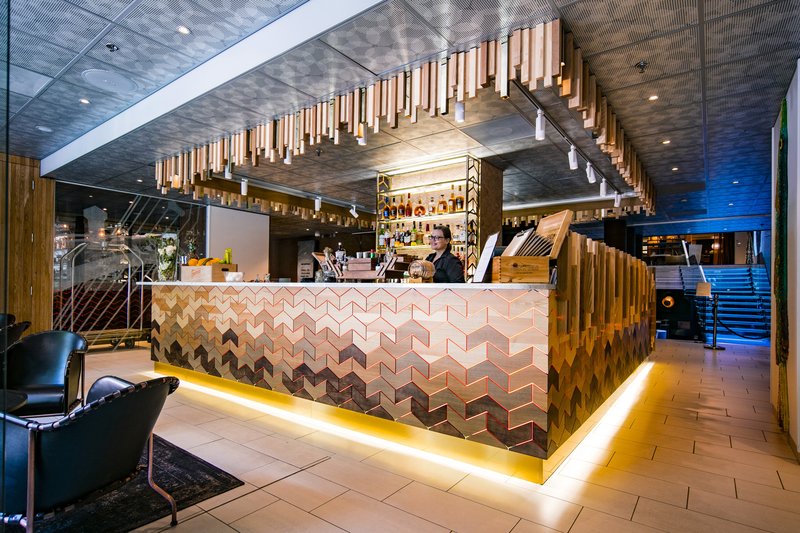 design et al are delighted to announce that Stylt Trampoli AB have been shortlisted for Bar/Club/Lounge Award in The International Hotel and Property Awards 2017.

Klaus K was a continuation of a the previous design by Stylt Trampoli in 2005, turning a tired nightclub into a bar and conference/ banqueting/ event space. The original assignment was to create a hotel ‘with style and story’. The client had decided that they wanted to convert an anonymous chain hotel to a modern lifestyle product.

The twist on it all was that they wanted to use the Finnish national epic ‘Kalevala’ as a base. Kalevala is a book based on folk songs collected in the 19th century by Elias Lönnroth, as a part of the Finnish independence movement. Kalevala has since been regarded as very important for the Finnish national identity and pride. ‘A personal contemporary hotel, inspired by the emotional contrasts of Finland’s national epic, its nature and drama’ is how Stylt defined the style of the bar throughout the design process.

Stylt divided the hotel and styled one half dark and the other light. The carpets and wallpaper are designed with quotes from Kalevala, the reception desk is designed as a gigantic egg (according to the Finnish national epic, the world was created from eggs). The rooms and the bar were re-named to reflect the traditional book, with the bar anointed as ‘Ilmatar’ after the goddess of wind. The design works because it is a seamless part of a carefully designed guest experience. It is based on a strong, strategic concept, it is meaningful as well as beautiful, durable and commercially effective.