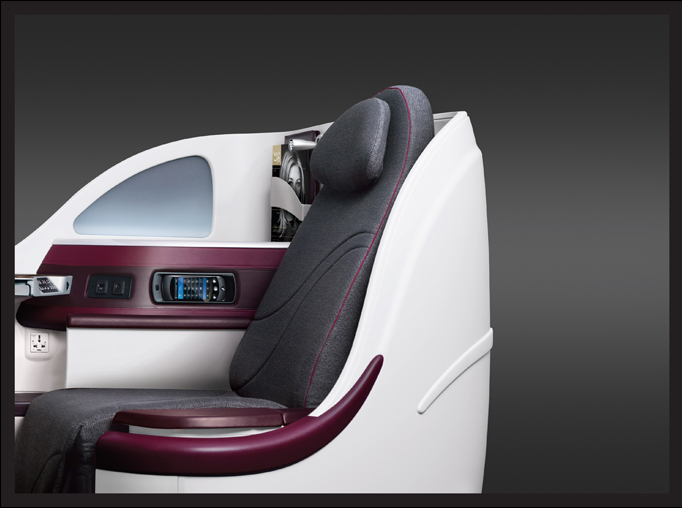 The process started with making several versions of the cabin layout at a two dimensional level, then B/E began the prototype stage. The team developed a mechanism that enabled the seat to sit, lounge and move into the bed position at the same time as developing the seat architecture. Several physical mock ups we made involving moving and non-moving geometry and at varying levels of refinement. As the mock ups became more refined they were used for research with customers to gather useful user feedback. The information gathered determined critical features such as the side area and table heights, the lighting panel functionality, stowage features and most importantly, the emotional response from someone ensconced in the new environment.

Why does the design work so well:

Great attention to detail was paid to the design of the main screen and interfaces, and how they work visually compared with upscale consumer product design. Different finishes, materials, shapes, colors, lighting and textures were evaluated for how they would enhance the design’s appeal.

The new design is distinct, innovative and yet characteristic of the Qatar five star brand and applies both to its functional properties and its visual appearance. The appearance of the seat is based on elongated and graceful lines, giving it a look of self-assured elegance. The main features of Qatar’s business class include uninterrupted lines on the privacy shells, broadly shaped two tiered console, aura inspired lighting and seamlessly joined armrests and console details. The passenger views a harmonious environment, with striking lines creating. flowing connections between various seating elements. This attention to visual detail is not as simple as it might appear. Many existing seat products have poor attention paid to “class A’ surfacing typically found in car design. Many hours were spent in ensuring that such surfaces were visually perfect.

This five star airline seat has features such as luxurious finishes more typically found in luxury transportation: individual ottoman units, typically reserved for First Class; and electrically driven armrests that minutely adjust to even the most particular customer’s preferred height. Multiple lounging and sitting positions are accomplished with a touch of a button and dining and stowage capability beyond the offerings of many first class products.

The highly resolved composite body combines several structural features to save weight and add structural strength, resulting in greater stiffness of the table and in overall strength and rigidity of the structure. The attention to such small details really set this seat apart from the average premium class product. The process of attention to detail has resulted in the breadth, depth and excellence in the design’s execution. Excellence is a key feature of Qatar’s and B/E Aerospace’s DNA and it is evident in the first class message this seat delivers.