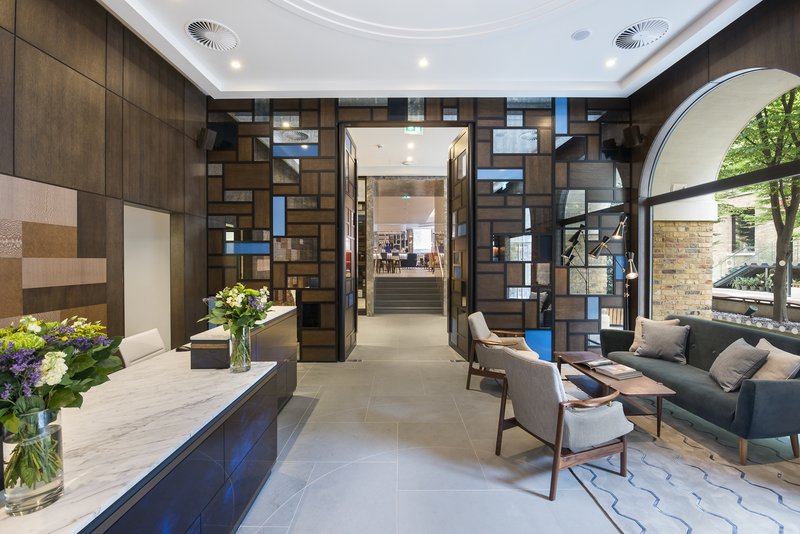 design et al are delighted to announce that SUSD have been shortlisted for Hotel Under 200 Rooms Europe Award in The International Hotel and Property Awards 2017.

SUSD was the instigator, architect and developer of the new £25 million Devonshire Club, first finding a vacant 60,000 sqft office building in the heart of the City of London, and then carefully negotiating with the City of London Corporation to obtain change of use to a 68 bedroom hotel and members club. SUSD has designed and created the Devonshire Club working closely with the principal investor, Lord Ashcroft. From the outset, the brief to the team was to evoke glamour and create gorgeous surroundings. The Devonshire Club comprises two buildings, a converted 19th century warehouse and an 18th century Georgian house. SUSD and the team connected the two buildings at the 2nd floor where there is a spa and gym and also connected at the ground floor through hair blow bar and nail salon, through a cigar shop and into the glazed winter garden.

The designers constructed a new glazed winter garden for year-round dining and this connects the ground floor of the spa building to the main club and hotel building through to the brasserie. The introduction of a new modern structure between the listed buildings took some negotiation with the City of London planning authority. The garden and new winter garden work as wonderful spaces in which to escape the bustle and noise right in the heart of the city. Through the winter garden is the 120 seat brasserie with a 25 metre long marble sushi and seafood/oyster bar, private booths and dining overlooking the garden. The first floor has our ‘causerie’ causing members to socialise and interact, and whilst the library bar has a slightly more masculine look which SUSD have balanced with the more feminine design of the cocktail bar.

There are roughly 4 types of guest room drawing from the mid-century palette, heavily influenced by Nattier with design features in the unique wall coverings. The interior designers, March & White, lift the essence of the locality’s exterior by honing in on elements of 1960s inspiration via wooden panelling and patterned wallpapers. Nattier have created a selection of vibrant geometric rugs, wallpapers and upholstery across the space. Small motifs from original 1960s Nattier clothing fashion prints have been enlarged, abstracted and used within rugs and fabrics throughout the Club. This, mixed with mid-century modern furniture, fittings and with bathrooms decked in Italian Carrara marble, the interior tone is kept fresh and authentic. Originally the buildings were built as warehouses for storing high-value luxury goods, brought into London from all over the world. The building’s new life as a Private Members Club and luxury hotel more closely evokes that historic glamour. A big driver in the growing popularity of Private Member’s Clubs stems from more flexible and digitally driven ways of working and living, people are able to work, eat and stay at the Devonshire Club. Private members’ clubs’ blends together all-day and late-night amenities which is another key part of their appeal, therefore expanding the trend of co-working spaces and members’ clubs merging into the same sector.