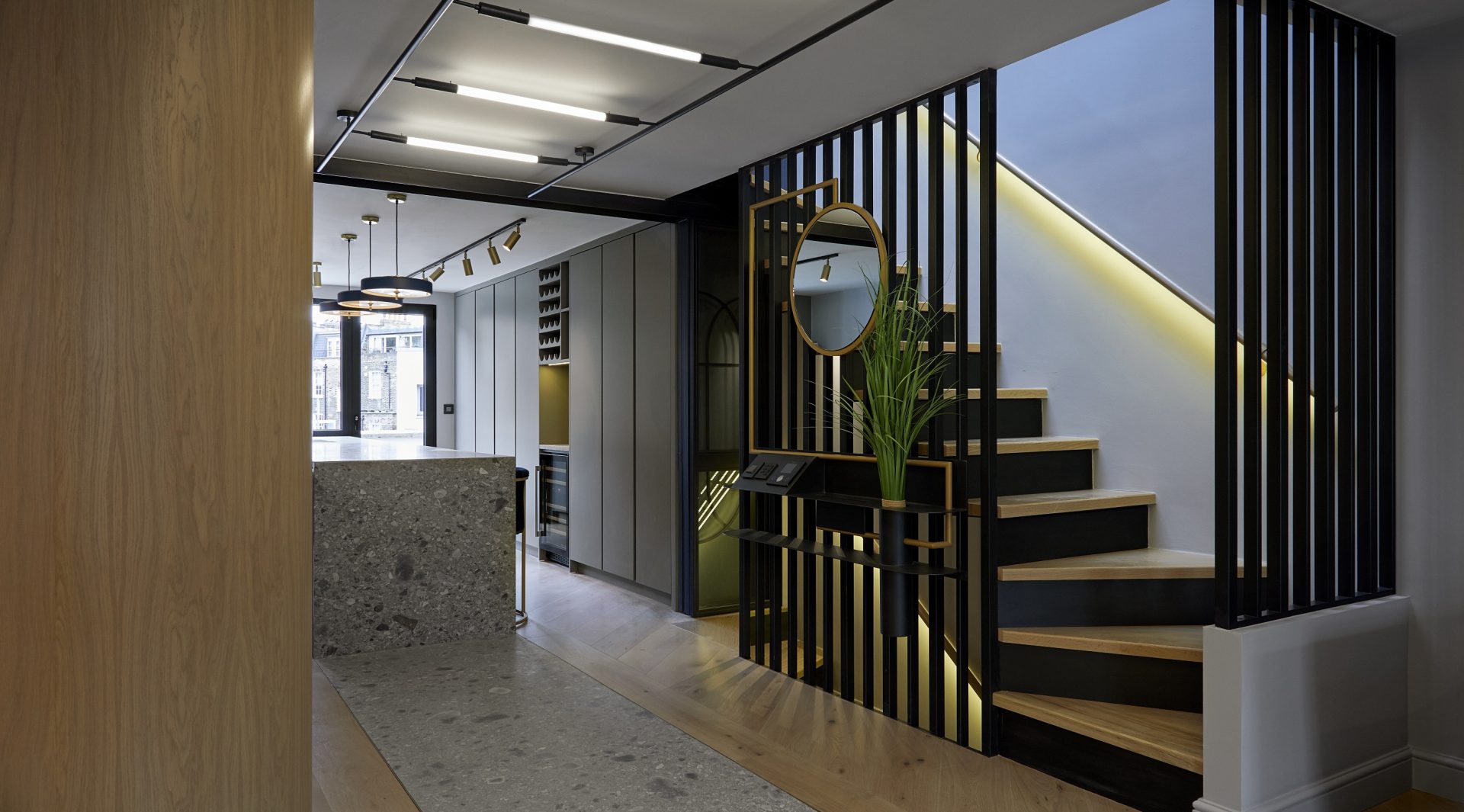 Congratulations to Urban Soul Project who have been shortlisted for Luxury Residence £1M- £2.5M Award in The International Hotel & Property Awards 2018

design et al are delighted to announce that Urban Soul Project have been shortlisted for Luxury Residence £1M – £2.5M Award  in The International Hotel and Property Awards 2018.

The 95 sq.m. apartment takes over the second and third floor of a three-storey building at Regent’s Park, London. The main objective of Urban Soul Projects design was the 25 sq.m. extension of every floor and the radical re-planning of the whole apartment. Having a new, larger shell, the second floor of the building turns into a unified space, accommodating the living room, kitchen and common wc. Respectively, the third floor is also rearranged in two bedrooms with their own en-suite. In the unified second floor, the concept of continuity is applied, with uninterrupted light flowing across it. This linearity is also emphasized by the continuity of materials; the crafted stone extends from the living room floor all the way to the kitchen bench and through the window to create a floating exterior bench. The only interruption of this linearity occurs at the frame, where the glass and metal divider moves along the ceiling rails, in order to offer space flexibility with its three possible positions: closed, partly closed, open. There is also a linear connection between the two floors, where the metal structural elements run on the vertical axis along the staircase, while additionally forming the railing and the entrance hall furnishing. The material choice (oak, stone, silestone, grey lacquer, black and golden metal elements, wall textures) combined with the clean lines of hidden lighting and specific point and linear lamps, complete a composition where all the elements coexist in balance.

The project is characterized by diversity and flexibility. While the functions are divided per floor (the public spaces with the living room and the kitchen on the first floor and the private ones with the two en-suite bedrooms on the second floor), there is the possibility of consolidating them conceivably and practically. Specifically, on the first floor the unification exists on the horizontal axis due to flooring materials, while the division exists on the vertical with the metal partition. The second floor, although is defined as the sleeping area, each room is independent and autonomous due to the en-suite bedrooms.

Urban Soul Project designed the building’s facade with reference to the residential complex in which belongs to as well as to the interior design of the apartment. The materials are transported from the interior to the exterior with respect to the existing elements of the urban environment. This leads to the fact that the building functions not only as one body with common characteristics, but also as a unit harmonized with the residential complex. As far as the technical / construction piece is concerned, worth mentioning is the metallic construction of the staircase with vertical elements to be static and aesthetic data. The aesthetic piece comes to complete with the furniture of the entrance which is suspended from these metallic elements. In addition, the metal partition of the kitchen is characterized by complexity of construction, both schematic and functional, as it presents diversity in the way it can be used. Last but not least, the kitchen’s and living room’s floor is a stone manufactured and transported from Italy especially for the project.